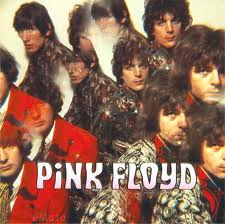 In the months following the release of "Sgt. Pepper's Lonely Hearts Club Band," psychedelic rock exploded on the scene. The Beatles weren't the first to venture into that territory, but they helped bring an underground musical form to the masses, opening the door for bands like Pink Floyd, who took psychedelic rock and eventually led the way into a new genre, progressive rock.

The Piper at the Gates of Dawn was Pink Floyd's first album, and the only one created under the direction of their legendary leader, Syd Barrett, probably the prototype of the rock genius driven to madness. Barrett's decent into insanity makes others like Brian Wilson and Sly Stone look almost normal.

For better or worse, madmen seem to make interesting music, and Barrett is proof of that. Piper is a crazy record, at times whimsical and at times just mad, but seldom dull. Recorded at Abbey Road Studios, the album is like a heavier Sgt. Pepper's without borders. Moving from fairy tales to space to bicycles and just everything in between, the album is unlike anything before it, defining Pink Floyd's unique musical vision and helping to usher in a period of baroque 'n' roll, where the studio is the most important instrument in the music.

For better or worse, Pink Floyd helped shatter the three-chord, three-minute idiom of popular music, pushing the way into art rock, and burying it all in the deep tones of madness.

Possibly my favorite song in the collection is the heavily whimsical "Flaming," with its fairy tale images, insane sound effects, and insane chord patterns. "Pow R. Toc H." takes the sounds and rhythms we heard on the exotica albums of the late fifties and makes them psychedelic--a pretty cool effect, actually. "The Scarecrow" and "The Gnome" are also interesting tunes. Throughout the album, every song seems to build on the last, creating a cohesive record that demands a close listen to get it all.

OK, and a weird album. There's no denying that this is a strange record, even in retrospect. Even without the help of chemicals, the listener's mood is altered, and we are pulled into the mind of a madman. It's not a comfortable place to spend time, but that only makes the record all the more interesting.

These album makes me wonder what Barrett could have given us if he'd been able to. On the other hand, if he hadn't been losing his mind, this would be a completely different experience, and not necessarily for the better. Art and madness often go hand in hand, and this is a classic example. I like it, in the right mood.

I can't wait to read Brad's take. I know how much he loves psychedelic rock.


I've tried listening to a couple Pink Floyd albums before (The Wall and Dark Side of the Moon) to see what the big hype was all about. That was a couple years ago, and I still haven't figured it out. They're weird as hell, but that's pretty much the only thing I have been able to take from Pink Floyd's music. I don't really find "weird" to be that cool. Just weird. So I have been kind of dreading listening to this album, but my old man's been patiently waiting for me to do it so we can move on to more reviews. So here goes...

The first third of the album wasn't all that bad. It was more rock-oriented and pretty structured. As structured as Pink Floyd allows themselves to get, anyway. "Matilda Mother" was probably the song I liked the most on the whole album.

When the record moves into its belly section, you start to hear how crazy and weird this band can get.

Doi, doi, doi... "Pow R. Toc H." almost made my brain go inside out. I just imagine a whacked out Syd Barrett jumping around like Dr. Frankenstein screaming, "We need more of this!!! Play that instrument over there!! What is it?! Who cares!!!! Just go nuts!!! This is AMAZING!!!! Don't STOPPPPP!!!!!!!!! HAHHAHAHAHAAAAAAA!!!!!!!!!!" He must have been on the verge of an aneurysm his whole musical career.

The last third of the album is more poppy. Still just as weird as everything else on the album, but there was more of a bouncy Beatles-ish kind of vibe to these last few songs. I want to hear my dad sing the song "The Gnome." He can't roll his R's so it would be pretty funny.

All in all, Syd Barrett was nuts. Or maybe the whole band was nuts. Even the producer was probably nuts. Either way, not just any band or producer could make (or even want to make) this record. It could only be done by a band of equally crazy people so they could all get inside of each other's heads to make the songs work. Everyone must have been on the exact same page, and that kind of scares me.

After listening to this album though, I am starting to understand the appeal of Pink Floyd a little bit. They had no rules. The only rule they had was "make it weirder." They were geniuses when it came to experimenting with different sounds, structures, chords, and all sorts of other stuff (including, but not limited to: drugs).

Although I am not exactly looking forward to listening to the inevitable other Pink Floyd albums on our list, I'm not dreading them as much anymore.
Posted by Scott at 10:13 AM