"The Kinks Are The Village Green Society," by The Kinks (November, 1968) 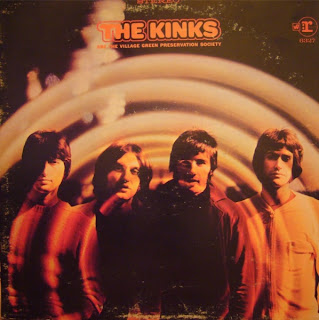 If you only get one Kinks album, this should be one of the ones you consider. Not only is it the last Kinks album to feature all four original members, but it's probably the most influential album they ever did. And, like so many of these classic, influential records, it didn't sell well when first releases.

This is a concept album that explores the old-fashioned British traditions that were passing into history.

The first three songs are as good an album opening as you're likely to find. "The Village Green Preservation Society" is the obvious opener, and is a fun little singalong that sets the themes of the collection. "Do You Remember Walter?" is an often funny character study that makes me wish I did remember him. You'll probably recognize the next song, "Picture Book," from the printer commercial a few years ago. It's fun, and catchy, and sounds too modern to be almost 45 years old.

The rest of the songs continue in the same vein, exploring people, objects, and cultural artifacts that were disappearing. Most of the songs are the kind of timeless rock and roll that could belong to just about any era. Of course, there are nods to 1968 psychedelia and late sixties style rock and roll, but this album very rarely sounds dated. The total effect is a transition from psychedelia to the heavier rock that followed.

Song after song is loaded with straight-up rock and roll and the Kinks' usual quirky lyrics. This is another of those albums where singling out favorites is almost futile, because I like the whole album. And an album it is. One of the reasons it failed commercially despite nearly universal acclaim from the critics is that it didn't have an obvious single. Even now, although I can enjoy individual songs, each track works best in the context of the whole, where they fit musical and lyrical themes that make them even better than they are on their own. But songs like the aforementioned "Picture Book," Big Sky," and the psychedelic-but-not-cloyingly-so nod to nostalgia, "Sitting By The Riverside," are all excellent songs. On side two, standout tracks include "Animal Farm," "Village Green," "Starstruck," the whimsical "Phenomenal Cat" (or "Phenominal Cat" as it's spelled on the LP jacket), "Wicked Annabella" (maybe my favorite on the record), and "People Take Pictures Of Each Other."

But even the songs I didn't mention are great tunes. The funny tale of embarrassment, "All Of My Friends Were There," "Last of the Steam-Powered Trains"--I want to add every song to the list of standout tracks, but if I do that, they no longer stand out, i suppose. But it's really hard to leave anything out.

In other words, I love this album.  Front to back, top to bottom, start to finish, this is a great record, sheer brilliance, a great example of its period without sounding out of place today. If you don't know this one, you really should.


I've listened to The Kinks here and there for awhile now, and I think I'll just stick with the hits. Nothing on this album really wowed me. It kind of blends in with the other mediocre British 60s trip-rock albums. Is "trip-rock" a real phrase? Trippy rock... Anyway...

Listening to this album as background music was enjoyable. It's pretty catchy music, and what they are doing they do very well. When you listen to the lyrics though, you realize these guys were borderline nuts, as were most musicians in the late 60s, I guess. The odd lyrics don't take away from the songs though. They're still enjoyable. Maybe even more enjoyable if you're actually paying attention to the lyrics because you can at least chuckle at them a bit.

The first half of the album is a lot stronger than the second, which gets a little more psychedelic/weird. When I wasn't paying close attention, I got a little bored about halfway through the album. It's good for what it is, but the weird lyrics and the overdone style just didn't interest me for very long. I give this album a solid "meh."