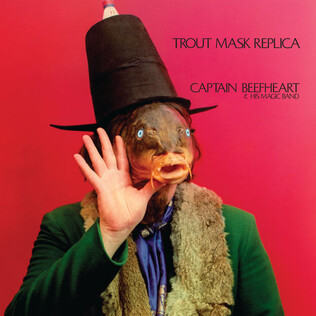 Another excruciatingly epic, experimental, cacophony of an album to add to our list...

Last time, it was Frank Zappa's "classic" Uncle Meat. I hated 99% of that album. But now we get to forcefully sit through a double-LP of Don Van Vliet's madness, otherwise known as Captain Beefheart. And wouldn't 'cha know it? Don's pal Frank Zappa produced this album. It only makes sense that Zappa would want to get behind this project.

I actually find this album to be a lot easier to get through than Uncle Meat. It's hard to pinpoint why or what makes it "better" (i'm using that term very loosely) but it's a little bit less obnoxious, I feel like. His lyrics are more like him just reading his looney poetry, but I kinda like it, I think .

Just like Frank Zappa's album we reviewed before, Trout Mask Replica contains a whole mess of different genres and sounds. "China Pig", for example, is a guitar-only blues track that I actually found very enjoyable. It's got Captain Beefheart's quirks, for sure, but looking deeper, it's a great track that takes me back to when we were reviewing Muddy Waters and similar blues/jazz stuff.

This album also has stuff that sounds like post-punk/hardcore stuff that I've actually enjoyed for quite a while ."My Human Gets Me Blues" has these interesting guitar riffs in some weird time signature, which doesn't sound too far from more modern bands, like Blood Brothers or At The Drive-In, if they had been around in the late 60s. I can dig it.

The good songs are very few and far between. Very. But when little gems popped up, it made me forgive the bad ones. I wouldn't call this a good album, but it's surely not absolutely terrible, like his friend Frank Zappa's was to me.

In every art form, there are artists who the experts claim to understand although they are difficult for the uneducated to make sense of. In my field, literature, people like James Joyce and William Faulkner come to mind. In rock and roll, Captain Beefheart has to be near the top of the list of those kinds of artists, and Trout Mask Replica is his best known work.

Over the past several months, I've sampled this album in bits and pieces, to prepare myself for listening to the whole thing. I don't know if I'm quite prepared for this review yet, but we need to move on.

Much of this album is cacophonic. It sounds wild and unstructured, like people who can't play broke into a studio and had at it. And there's the genius of this album, I supposed. Every weird sound, every note, was meticulously planned. The album took eight months to rehearse. It's hard to make sense of, especially on the first listen, but it's not as free-form as it sounds. Or so we're supposed to believe. Mix the rough music with beat-style poetry and you get an album that is sometimes entertaining, sometimes perplexing, and sometimes annoying.

Once you get over the shock, it's mostly listenable, although I still prefer it in smaller bites than trying to get through the whole thing in one sitting like I am for this review. Songs like "Ella Guru" or "Moonlight In Vermont" present a jazzy, bluesy sound full of musical and vocal play. Play is fun, right? The more you listen, the more it starts to almost make aural sense, until they throw something in to break the reason you thought you were finding.

Some bits, like "China Pig" and "Well," sound like old low-fi blues recordings. Those tend to be the most listenable for me. In fact, "Well" is kind of cool. Or maybe I just feel some relief because it's a vocals-only song, giving me some relief from the music.Same with "Orange Claw Hammer," a fun and odd little pirate chanty. Maybe I shouldn't mention that it's odd. That's kind of understood on this record.

Much of the wordplay on many of the tracks is fun, even when it's ridiculous. "Old Fart At Play" is a prime example. The last song, "Veteran's Day Poppy" is also kind of not as annoying as much of the rest, and for sequential moments at a time quite enjoyable.

This is like some of those modern paintings that look like meaningless splashes of color on a canvas, but when you take the time to really examine them, you can find beauty. These are sound poems, and the Captain knew exactly what he wanted on his canvas. If I don't get it or if I find much of it unenjoyable, so what? Who says art always has to be enjoyable? But why does it have to be so long? And why does it have to hurt my head and make me feel stressed?

So maybe I'll never really understand why this album is so close to the top of so many Greatest Albums lists. I'll leave "getting it" to the experts and the cognescenti. But, hey, I enjoy a William Faulkner novel here and there, and can appreciate James Joyce. Maybe if I listen enough, I'll get it. It's just that, well, I don't know if I care that much about understanding it, when there are so many albums to discover out there, so much that I'll really like.
Posted by Brad at 3:14 PM No comments: