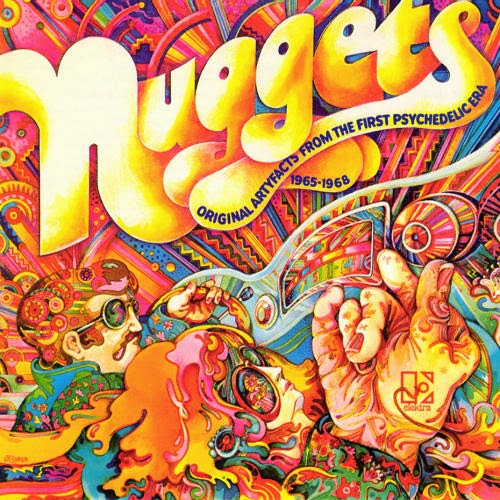 For most sets like this, I'd complain about a various artists compilation being on a classics albums list, even when I really like the music, as in this case. But this compilation belongs on the list, for two reasons.

First, this set was very popular. It led to sequels, and eventually to a series of CD box sets, some of which I have. Popular does not necessarily equal classic, but in this case, because the album is full of classic music that often came from small labels and short-lived bands that didn't necessarily release classic albums (or even albums), I'll let this one in.

Second, and most importantly, this compilation was hugely influential. Although the subtitle and cover art make it look like this album contains a bunch of psychedelic music--and it does--the record is most notable for its sizable collection of late-sixties garage bands. Why does this matter? Because the re-emergence of these lost garage classics led directly to punk music, one of the biggest movements to grow out of the seventies, one that is still dominant today. In fact, the liner notes for this package contain one of the first usages of the term "punk rock."

Songs like "Dirty Water," "Night Time," and many of the others on this record, are clear predecessors to punk. Seminal punk bands like the Ramones ate up these garage classics from the sixties, sometimes even covering the songs.

I'd talk about all of the songs I like, but there are too many to list in this 27-song compilation. And they don't really matter. It's more about the movement and the unburying of lost songs that often appeared on small, local labels. I'll mention a few songs, though. Like "Psychotic Reaction" by the Count Five, a band that I can attest to being a garage band because they used to practice in a garage on my grandparents' street in San Jose, California, where I remember seeing them at least a couple times when I was but a wee lad. I wasn't impressed, but I was like six. I like their song now.

And then there's the Brian Wilson/Smile inspired beauty of "My World Fell Down" by Sagittarius, featuring sometime-Beach Boy Bruce Johnston. It's a great song. "Pushin' Too Hard" by the Seeds is pure protopunk. "A Public Execution" by Mouse & the Traps, the somewhat exhausting "Run, Run, Run" by the Third Rail, "Tobacco Road" by Blues Magoos, the blues classic "Baby Please Don't Go" as performed by Ted Nugent's band, the Amboy Dukes, "Open My Eyes" by Todd Rundgren's band The Nazz--these are all just great songs. And there are so many more. It's fun to look up these bands, most of which are barely remembered, and see how many of them include musicians who later became famous.

So, although a various artist compilation, like a greatest hits package, might technically be cheating when included on classic album lists, I won't argue with this one. Arguing would just take away from my listening time, and I love listening to this one. I even think that Brad, not a fan of psychedelic music, is going to find a lot of groovy tunes to dig in this one.

Well, my dad was right. I did enjoy this!

It's obvious that this compilation came out at the peak of the Beatles initial success in the mid-60s because a lot of these bands sound a lot like them. Like, a lot. For example, The Knickerbockers' track "Lies" sounds very early-Beatles-ish. I guess when it comes to mid-60s garage bands, it only makes sense for them to be influenced by the biggest bands at the time, especially The Beatles, as this collection consists of songs that came out right after the Beatles came to the U.S. for the first time. Basically, if you like the early Beatles music, you'll most likely dig this entire album.

The Beatles aren't the only band with obvious influence on a lot of these bands though. "Don't Look Back" by The Remains sounds a lot like a song The Rolling Stones would have penned in their early days. The vocalist even emulates a bit of Mick Jagger. Also in a good way.

On this compilation, when the songs don't sound Beatles-esque garage rocky, they are your typical 60's psychedelic pop/rock, which I don't gravitate to as much. I don't think any of the songs on this collection really bothered me at all though. Despite its length, this was a pretty enjoyable listen front to back. There are definitely a few bands on here that I'd like to check out more.
Posted by Scott at 6:51 AM No comments: