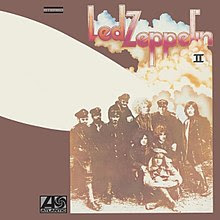 Odds are that if you're reading this blog then Led Zeppelin is already a borderline household name for you. When you listen to a Led Zeppelin record, you know exactly what you're getting. This album is not an exception. It isn't much different than their debut at all, but that's totally alright with me. These guys knew how to make 5+ minute long rock songs interesting and original yet familiar and catchy, all without sounding overly repetitive, at least for the most part. I really can't say anything negative about any of the songs, the members, or the album as a whole. It's just a great classic rock record, and a perfect sequel to their debut, that leaves me wanting more. Normally, I'd probably complain a little bit about the drawn out slower songs on this, but right now they're hitting me in just the right way.

My favorite songs on this album are:
Whole Lotta Love
The Lemon Song
Heartbreaker


Led Zeppelin was such a great band, and compared to the similar rock records that we've already reviewed from this era, Zeppelin just had a different spark to them. They stand out. Maybe it's got a lot to do with each individual member of the band being incredibly talented and perfect in their role, or maybe it's because of guitarist Jimmy Page's production skills in the studio. I don't know what it is exactly, but whatever they had, it was a perfect formula. If you're going to listen to this record, listen to their debut as well.

Led Zeppelin's second effort is one of those albums that every fan of classic rock has to have.

The album opens with what may be the classic Led Zeppelin rocker,  "Whole Lotta Love." It's pretty much a straight blues-based rock and roll song, except for the prog rock middle section. And if you've never heard it, you've probably been living under a rock. Other classics on the album include "Heartbreaker" with its instantly recognizable riff and incredible solo, "Living, Loving Maid (She's Just A Woman)," and "Ramble On."

The album ranges from the straight-up blues of "The Lemon Song" to the psychedelic "What Is and What Should Never Be." It has touches of prog and pop, with legendary guitar work and big drum solos.

The album is also somewhat controversial, with three songs that resulted in lawsuits for failure to give credit to sometimes obvious sources, something the band doesn't deny.

What more can you say about this one? If you like Zeppelin, you already love this album. If you don't know them, check this one out for a good sense of what they were all about.

It's a classic rock album with a bit of everything you expect from a great 1969 band.
Posted by Brad at 11:45 AM No comments: