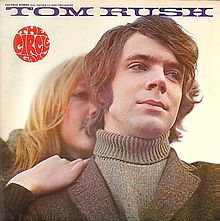 You could call 1968 the year of the concept album, and this is another. This time, folk-rock singer Tom Rush follows a relationship from beginning to end.

Most of the songs on the album were written by others. Rush wrote two himself, but others come from such big names as Joni Mitchell, Jackson Browne, James Taylor, and Charlie Rich. He might not have written most of the songs, but he combined them into a story and delivered them in his own style. Using so many cover songs was an interesting choice, considering Tom Rush's own songwriting talent. His two songs are among the best on the record, especially "No Regrets," which has become a standard, covered by several big-name artists.

This is one of those records that you have to put on and then sit back and listen. The poetic lyrics demand attention. And it's easy to give it. Like a lot of folk and folk-rock, the voice isn't the draw. Rush's voice is kind of a combination of Dylan and Lou Reed, with a little Gordon Lightfoot and a touch of Leonard Cohen mixed in, but it usually fits the songs fine. The draw is the songs and the messages behind them.

Some songs are a little jarring. For example, if you know James Taylor's version of  "Something in the way she moves," Rush's almost hyperactive musical arrangement feels more than a little odd. But for the most part, the album takes a mellow, enjoyable, and emotionally satisfying folk-rock approach.

I like the record best in its mellower moments, such as "Tin Angel" and "Urge for Going," both written by Joni Mitchell. The somewhat countrified old-school rocker "The Glory Of Love," written by Billy Hill and performed by people like Benny Goodman in the distant past, is fun, but sounds slightly overdone compared to most of the tracks.

Jackson Browne's "Shadow Dream Song" holds up well to the Tom Rush treatment. It's one of Browne's earliest songs and shows that he'll one day be a songwriting force to be reckoned with. It's one of the best songs on the record. I also really like Joni Mitchell's title song, "The Circle Game."

This record isn't a personal favorite, but when it's good, it's really good. I've gone to it a couple times in the last few months, when the mood has hit me. Usually I'll listen to a few songs, then move on to something else. But like most concept albums, it is best when listened to whole, despite a few weaker songs. Where it's weak, it's usually due to some production decisions that aren't to my taste, rather than the songs themselves, as in "Something In The Way She Moves." Overall, though, it's a solid album, a classic in its genre.

One additional note: the cover photo of Tom Rush and his girlfriend Jill Lumpkin was shot by photographer Linda Eastman, who later became Mrs. Paul McCartney.

The 60s were all about folk music that (to me) was very hit and miss. My tastes sway more to "miss" but I actually really liked this album by Tom Rush. I'd never heard of this guy before, but it's classic singer-songwriter/folky music, but the production and other instrumentation going on sets this apart a little bit from the rest of that era. It's not just an acoustic guitar and vocals. I always prefer multiple guitar tracks and other instruments in this kind of music.

Most of the songs kind of stay in a certain style, but "The Glory of Love" is a fun little early 60s pop-inspired tune. It's full of melody and even features background vocals by a female group. Not sure who it is though. This was one of my favorite songs from the album though. I'm a sucker for that kind of stuff.

Generally, I've found that most of folky stuff from the 60s all sounds kind of similar. This album was refreshing though. It has the classic popular folk style, but there's also a lot of other non-traditional parts throughout each song that makes it not as bland to me. Some might argue that a lot of these kinds of records were so stripped down is so you could focus on the story that the songwriter was telling through their lyrics. But I think that Tom Rush has the perfect balance of interesting music and interesting lyrics. I don't feel like the music takes away focus from the stories at all.

This is definitely a folky album that I don't have a hard time backing at all. Consider me a fan!

On a side note: Tom Rush's voice reminds me a lot of a singer-songwriter I like named Mark Kozelek (who is also the frontman of the bands Sun Kil Moon and The Red House Painters.) If you haven't checked him out, or his other bands, do it.
Posted by Scott at 2:09 PM No comments: 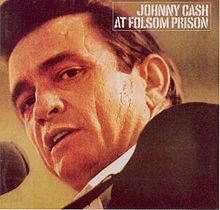 You pretty much know what you're going to get from a Johnny Cash album. And this has exactly what you'd expect. We are releasing the 1999 reissue, which contains three more songs than the original release ("Busted," "Joe Bean," and "The Legend of John Henry's Hammer." There's also a 2008 Legacy Edition, which contains both shows Cash played that day, along with a DVD.

My mom had this album on a reel-to-reel tape and I listened to it often as a kid. So it brings back good memories. But you definitely have to like Johnny Cash to listen to this. The one knock on his unique sound is that it doesn't vary that much from song to song. Still, this deserves its classic status as one of the great live albums.

From the opening "Hello, I'm Johnny Cash" that leads into the classic "Folsom Prison Blues," through the rest of the 19 tracks, you get everything you want from the man in black. Whether he's singing standards like "Busted" or "Green Green Grass of Home" or showing his funny side in songs like  "Dirty Old Egg-Suckin' Dog" and "Flushed From the Bathroom of Your Heart," Cash provides a set list aimed squarely at the prisoners in the audience. His audience interactions are brilliant and personal. He's not afraid to sing about criminal acts, including drug use and murder, and even suicide by prison guard, topics some performers might shy away from, considering the audience. He sings about justice ("Cocaine Blues") and injustice ("Joe Bean"), and about missing the people back home, as well as the hardships of life behind bars, subjects close to his audience's hearts. And the inmates love it. They go nuts in several places on this record. The result is a live concept album, and it's a good one.

It's a lot of Johnny Cash in one sitting for me, but it makes it clear how he reached legendary status. His career was lagging before he released this record, without a hit for a few years, but it became a sensation and led to a new peak.

I was kind of dreading this one. I generally like my Johnny Cash in smaller doses. But I enjoyed the album more than I expected, and almost as much as I did as a kid. I remember his San Quentin album a little better with its tons of hits, but I like the concept album nature of this one more, I think.

I've never been a big Johnny Cash (which probably isn't very surprising, if you've followed our blog at all and realized that I'm not the biggest folk music fan) so, like my dad, I was kind of dreading listening to this too. Hence our two month hiatus.

The album kicks off with Johnny's low voice saying, "Hello, I'm Johnny Cash." This is definitely Johnny Cash. He's doing what he does and he's doing it well.

It's fitting for him to be performing these songs at a prison. His lyrics were probably never as relatable in any other setting. For example: "I shot a man in Reno just to watch him die" or "I took a shot of cocaine and shot my woman down."

The recording quality of this album is fantastic. It sounds clear and it's mixed very well. Sometimes live albums, especially older ones, are mixed terribly. Maybe this version we're listening to is remixed and remastered though. I'll have to find out. But regardless, I'm impressed with the quality.

In the end, I'm still not a Johnny Cash fan, but this is a fun performance. The overly-responsive crowd, Johnny $'s humor between songs (and sometimes in the middle of songs), etc. make this fun to listen to. But being a double disc album, it feels a little too long to me.

And thank goodness someone got the man a drink of water!
Posted by Scott at 1:39 PM No comments: