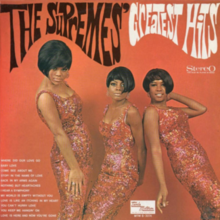 In the mid-sixties, the Supremes were up there with people like the Beatles and Beach Boys as a chart force, creating hit after hit and dominating the radio. This two-record set of twenty songs contains all the hits and several less-familiar B-sides from that period.

There's not much more to say. If you like the Supremes but aren't fanatical enough to want all of the original albums, everything you'd expect to hear is here. "Can't Hurry Love," "Stop in the Name of Love," "Where Did Our Love Go," "Baby Love," and even more songs with love in the title, "Come See About Me," "Back In My Arms Again," "I Hear A Symphony"--all bona fide classics and more familiar to many of us than the stuff at the back of the refrigerator. Throw in some lesser tunes like "Ask Any Girl" and "Whisper You Love Me Boy," that you might not know but that will sound familiar anyway, and you have a classic greatest hits comp.

There aren't any big surprises. It is, afterall, a greatest hits package. So kick back and enjoy some soulful Motown diva pop. It's a welcome antidote to the experimentation of 1967, straight up pop song, mostly about love. Nothing particularly groundbreaking about the songs, but the Motown productions are stellar and the performances by Diana Ross and her girls are, well, yeah, supreme.


Now this is more up my alley! Who could not love The Supremes. They are just a fun little Motown group that you can't help but dance along with. There isn't really much more to say about Diana Ross and The Supremes.

Some of my favorite tracks on here are "Baby Love," "Where Did Our Love Go?", "Stop! In The Name of Love," and "Come See About Me." There's a bunch more that I like just as much, but I don't want to copy and paste the entire track list. The only negative thing I'd have to say about this compilation though is that I enjoy the first disc more than the second.

Like my dad said, there's no real surprises here. The biggest surprises are the B-sides, and even those are just about as great as the hits.
Posted by Scott at 10:03 PM