"Their Satanic Majesties Request" by The Rolling Stones (December, 1967) 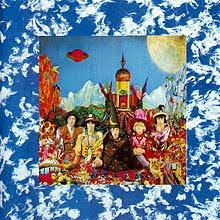 In the wake of Sgt. Pepper's, everybody had to do a psychedelic album, including the Stones. Problem is, their album sounds like they were jumping on a bandwagon. It sounds insincere, more than a little off, and just not especially good.

The Stones are best when they play blues-based garage rock. They are clearly out of their element here. A few songs are interesting, like "She's A Rainbow" (reviled by John Lennon), and my favorite from the album, "2000 Light Years From Home," but most of the album comes off as nothing more than a pretention, over-produced (and badly produced) attempt to follow a trend. Trend following is the opposite of what people love about the Stones. Throughout their 50 years, they've been themselves, managing to stay current without huge shifts in style--except here.

The album charted very well, #3 in the UK and #2 in the US, but didn't maintain its popularity very long. Many listeners agreed with Keith Richards, who famously called the album "a piece of crap." Unfortunately, when it comes to many of the songs, he may be right. Like in the way overlong "Sing This All Together (See What Happens)," with all of its sound effects that just never quite work. Or "Gomper," which sounds like an attempt at Indian music by somebody who doesn't understand it.

I'm all for bands stretching their wings and trying new sounds, even if it doesn't quite work, so I'll give them credit for trying. Every band needs to grow and occasionally take a new path to keep it fresh. I'll give them even more credit for returning to their own sound after this anomaly.


A lot of these songs just sound like... well... not songs. They sound like they improvised parts on each instrument individually, recorded themselves saying weird stuff into the microphone (snoring? really?), and then played them all at the same time, and then declared it as art and put it out into the world. Like my dad said, it's obvious (but very poorly executed) that the Stones were trying to ride the coattails of The Beatles here. It almost sounds like they're trying to make fun of The Beatles.

I didn't know "Yellow Submarine" was on this album. Oh wait, it's actually the song "On With The Show."

"Sing This All Together" would be a lot better if it was half as long and didn't have the random middle section. That song is probably the only one that I kind of liked. "2000 Light Years From Home" is okay, but it still doesn't feel original at all, no matter how hard they tried for it to be. I'm not sure why this album is considered a classic, other than maybe a classic parody album.

The album's production has a flaw that I've noticed in a lot of albums from this era. It's the panning of the tracks that really bothers me. Why is it that they sometimes insisted on putting the drums in just one speaker, or like in the case of "Citadel," the lead vocals are only in the left speaker. It drives me crazy. Drums and lead vocal tracks should always be in both ears. It feels so lopsided when they're not. It really bothers me.
Posted by Scott at 9:35 PM

Email ThisBlogThis!Share to TwitterShare to FacebookShare to Pinterest
Labels: production, psychedelic, rip off, the beatles, the rolling stones