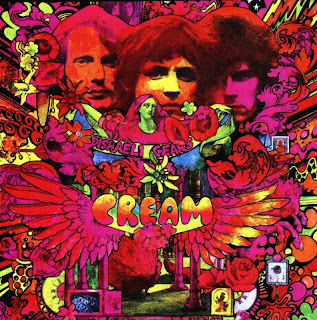 This is one of those heavy sixties rock albums that every collection should include. You know any album that begins with the one-two punch of "Strange Brew" and "Sunshine of Your Love" is going to rock. Throw in songs like "Swalbr" and "Tales of Brave Ulysses" and you have a bona fide classic. Although it's still full of those sixties sounds, I have a feeling Brad will like this better than some of the other recent albums, especially the bluesier songs like "Outside Woman" and "Take It Back."

Being drenched with psychedelic sounds doesn't stop this album from rocking. It's full of great Clapton guitar work and classic riffs. "Sunshine Of Your Love" is the obvious killer track here, but there's plenty more where that came from. The epic "Tales of Brave Ulysses" is one of the great album-oriented rock tunes of the period, one I don't listen to enough. How can anyone resist a song with lyrics like "Tiny purple fishes run laughing through your fingers"?

It seems kind of fitting that I'm listening to this one in San Francisco, even though Cream was not a San Francisco band. You know this was played heavily in the Haight as the summer of love faded into the winter of...well, whatever.

"World of Pain" has cool psychedelic sounds as the singer contemplates a tree outside his window. "Dance The Night Away" also seems to be interested in what's outside the window, only with some heavier riffs mixed into the mellowed-out contemplation. I also like the Cockney stoner tune, "Blue Condition." It makes me laugh. But that's nothing compared to the album's closer, "Mother's Lament." That song doesn't quite fit the rest of the album, but what a fun little encore.

Classic albums attain that status for many reasons. Some are just so packed with hits that they can't be ignored. Others are just plain great music that transcends time and place and remains popular for decades. Others, like Disraeli Gears, are a time capsule of their time. Is it dated? Sure. Nobody makes music like this anymore unless they are paying tribute to that time. But "dated" isn't necessarily bad, especially when the record serves almost as a historical document of the time, and features one of the world's great guitarists and one of the great bass players.


"Strange Brew" kicks off the record with a fun little groove that you can't help but bob your head to immediately. This might be my favorite track off the album. And then it kicks right into the massively popular jam "Sunshine Of Your Love," which is undeniably one of the most recognizable rock guitar riffs. We can thank the great Eric Clapton for that one.

Eric Clapton definitely is the star on this album, and that goes without saying really. The dude shreds on the guitar and that's all there really is to it.

It's got a little bit of filler, but this album is pretty great for the most part. The awesome songs help you look over the filler tracks. This isn't one of my favorite albums we've listened to, by any means, but it's definitely not one of the worst either. It's in the middle range somewhere.
Posted by Scott at 1:57 PM