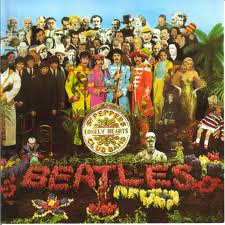 The epic "A Day in the Life" concludes the wacky last half of the album. There's a huge build up that sounds like a train is about to come slam into your face, but right when it's about touch your nose, it poofs like smoke and immediately takes you back into another catchy little verse. The part "I love to tu-U-u-U-urn you o-O-o-On" is one of my favorite moments from the entire record. And just when you think you got away from that damn nightmare of a train, it comes back, but this time even faster than before! It knocks you on the ground, unconscious, until you come finally to and notice you're seeing stars.
Posted by Scott at 5:58 PM