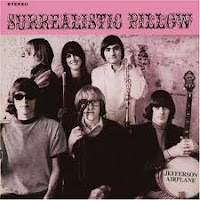 This is Jefferson Airplane's second album, but it's the first after the band was joined by drummer Spencer Dryden and vocalist Grace Slick, one of the sixties' most recognizable voices. It is also the first major success to come out of the San Francisco counter-culture scene.

The album's first track, "She Has Funny Cars," makes a good opener, but the record doesn't get going until the second song, "Somebody To Love," which gets my vote for one of the greatest rock and roll singles ever. I love that song. Paired with side two's "White Rabbit," "Somebody To Love" cements Grace Slick's reputation as an icon.

Almost everything about this song is first rate. A driving rhythm section, amazing vocals, great guitar work, hippy lyrics, and an overall upbeat counter cultural feel opened the floodgates for other bands from San Francisco. Together with LA bands like The Byrds and The Mamas and Papas, this music invited the peace and love crowd to come to San Francisco for a summer of love, with the intersection of Haight and Ashbury streets and ground zero. That area eventually became a sad disaster zone, but for one short period, it was something beautiful.

"Somebody To Love" and "White Rabbit" aren't all this album has to offer, although they'd be enough. I've always had a tender spot for "Today," with it's great lead vocal by Marty Balin. Jorma Kaukonen's guitar work on "Embryonic Journey" is a classic of acoustic psychedelia. And I also really enjoy Balin's "Plastic Fantastic Lover." "Comin' Back To Me" also has a marijuana-fueled beauty that shows off the band's softer side. Grace Slick gets most of the attention--and deserves it--but Marty Balin's vocals are also a major part of the band's sound, a psychedelic instrument in their own right. "3/5 of a Mile in 10 Seconds" is a another great example of the Airplane's sound, every bit as good as the record's pair of massive hits.

The version I have of this album includes several bonus tracks. Although we've tried to stick pretty much to reviewing the albums in their original form, I can't help commenting on the great blues track, Kaukonen's "In The Morning." (Brad will love the re-emergence of his favorite instrument.) The song just plain rocks. Sure, it doesn't exactly fit the sound of the album, which is probably why it was left off, but MAN! what a great tune. Same with the Paul Kantner rocker "Go To Her." There are two more bonus songs (and an instrumental hidden track), plus mono single versions of "Somebody To Love" and "White Rabbit." In this case, the bonus tracks really do enhance the original record. It doesn't always work that way.

I don't listen to this album enough. Whenever I do, I'm reminded just how great it is. There's really nothing here I don't like. It takes the LA folk rock and adds a generous twist of San Francisco's counter-culture (ahem) "fog," and the result is one of the best albums of the sixties.


Going into this album, I felt a bit pessimistic. 60s hippy rock music isn't typically my favorite, but by the third track, I was feeling pretty good about it! There's something about Surrealistic Pillow that is different than other albums of the same era/genre. It's got nice equal doses of just about everything from the era, and I like that. It's not overwhelmingly hippie-ish, but it's also not just a 60's rock record.

There were only a couple songs that I didn't really like as much as others, but to me, that's really surprising. Even the slow folky songs like "Comin' Back to Me" were interesting to me. Maybe it was because of "spiritual leader's" Jerry Garcia's fancy guitar playing. If it's even him. There's controversy about if Jerry Garcia contributed to this album at all. Garcia apparently even suggested the album title, but who knows. I'll need to research that stuff a little more.

But all in all, I was pleasantly surprised by my enjoyment of this album. It's got everything from folky acoustic tracks to fast rockin' songs to blues jams. I'd say this album encompasses the 60's perfectly. It makes me dislike the 60's a little bit less.
Posted by Scott at 1:30 PM