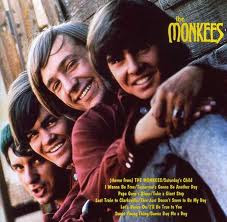 I'm not ashamed to admit it. I like the Monkees. OK, maybe they were created by network suits with the idea of a TV series inspired by the Beatles. But the fact remains that they created some excellent pop music.

I don't know if I'd pick this first album as their best, but it's still pretty good. True, they don't do much more than sing their parts, where later they wrote and played more, but the songs are solid and these guys had some decent vocal chops, especially Micky Dolenz, who I consider one of the most under-rated vocalists in rock and roll. "Take A Giant Step" and "Last Train To Clarksville" both show off his abilities. They were treated like Fabian and Frankie Avalon, pretty faces with some talent who were fed songs from the Brill Building and forced into an image. Only, it didn't take the Monkees long to outgrow their handlers, much to the chagrin of the people who wanted to be their puppeteers, especially Don Kirschner. And, as it turned out, to the detriment of their popularity.

Even this early on, the two songs written by Mike Nesmith showed that he had real talent. Nesmith took his experience with the Monkees and became one of the pioneer of rock videos.

The Monkees is, despite its corporate baggage, an enjoyable and listenable album. Maybe putting it in the same list as Revolver, Pet Sounds, and Blonde on Blonde is pushing things a bit, but there's no denying the tremendous commercial success of this group, whose popularity continues to today, when they get more respect in retrospect than they did during their career. They are among the best of the bubble gum pop groups, easily transcending the disposable twee-ness of most of their peers.

So laugh if you must, but I'll listen to this record more than many others on our list. In fact, the Monkees currently fill two of the six CD slots in my car, and have for a few weeks. Whether it's Last Train To Clarksville" or the silliness of "Gonna Buy Me A Dog," the Monkees are just plain fun to listen to, a reminder that music does not have to be experimental, deep, or serious to be good.


I've always known of The Monkees, but I've never really jumped into any of their albums. I've heard singles though, like "Daydream Believer," "I'm A Believer," "Last Train to Clarksville," and a couple others. So this was technically the first time I have ever listened to a Monkees album. And what better place to start than with their debut.

I believe that Davy was the front man later on in their career, but it seems that in the very early days, Micky Dolenz was more of the voice behind The Monkees, while Davy was more or less just the eye candy.

Davy's first lead vocal track on this album is "I Wanna Be Free," which is a stripped down acoustic (borderline folky) song that I really enjoyed. Davy's voice was a perfect choice for that song. This is the only song that Davy sings lead on that I really liked though. Like my dad mentioned, Micky has a great voice and I think his songs are the strongest.

All of the songs on this record are great. It's a shame that The Monkees didn't actually write the majority of them though. In fact, only two of them were written or co-written by a Monkees member (Michael Nesmith.) I'm interested to dig deeper into their catalog sometime so I can see what they wrote after they broke away from the corporate puppet masters.
Posted by Scott at 7:05 PM