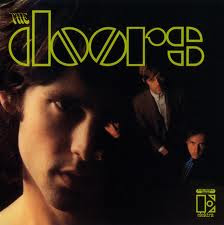 1967 opened with The Doors breaking through to the other side, the first classic album in a year full of experimentation, rule-breaking, psychedelia, and the summer of love. This would be a year dominated by Los Angeles and San Francisco, although the UK and other places would make their presence known.

Say what you will about Jim Morrison not having much of a voice, he had a power and a way of presenting a song. Over confident, swaggering, bigger than life. Whether stoned, angry (and probably still stoned), or whatever, his was the right voice for the drugged-out world of '67, especially when mixed with enough electric organ.

The Doors is one of those records that demands your attention. It's hard to do something other than listen. This is commanding music. There are the singles ("Break On Through (To the Other Side)" and the number one smash, "Light My Fire"), of course, but many of the other songs on the album have become bonafide classics. This is the era, remember, when albums had become more important than singles, at least for those artists who wanted to transcend pop. Songs became too long for the radio. The 7:06 "Light My Fire" was shortened considerably for AM radio play, with the long instrumental break and organ solo becoming the main casualty of the need to play more commercials. The Doors is truly a classic album, not just a collection of great songs but a coherent (well, mostly, I guess depending on your definition of "coherent") whole with a sound of its own.

If you know The Doors from their songs but not their albums, you'll be surprised how much of this record you know, even if you don't recognize the song titles. The album has become a cultural artifact, an icon of its time, the model of the heavier side of the year that gave us the Summer of Love with its sparkly psychedelic pop and folk rock. Unlike some of the music of that "heady" time, The Doors still holds up as something more than nostalgic. It really is a great album, the kind that you can even recognize as great if you don't really care for it personally. I happen to like it, even if The Doors don't rank as one of my favorite bands. This is just great music, with undeniable power.

The Doors are the epitome of a drugged out 60s rock band. This band was made for Woodstock, fuzzy posters, and black lights. This kind of music is totally outside of my comfort zone, but I liked it for what it is.

This album has a bit of everything from the era. Including, but not limited to: blues influenced rockin' singles, slow songs to sway to in a weird drug-induced manner, long guitar solo/jammy parts, experimental moments, lots of organ, and a shirtless front man for the sober people to drool over.

Jim Morrison had a great voice, and the instrumentation on this album is great. I really only liked a small handful of songs from this album though. "Break On Through (To The Other Side)," "Soul Kitchen," and "Back Door Man" were the only songs that really kept my attention and had me excited. The others just didn't grab me as much.
Posted by Scott at 7:33 PM