"Pictures at an Exhibition" by Emerson, Lake and Palmer (November, 1971) 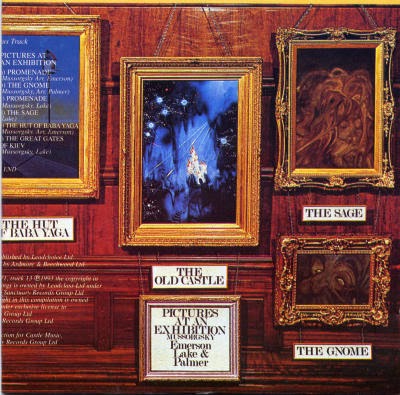 ELP's take on Modest Mussorgsky's Pictures at an Exhibition demonstrates simultaneously everything that was right and wrong with progressive rock in 1971.

On the one hand, the band brilliantly pulls off their attempt to show that a well-known classical piece can be performed live by a rock band, and adapted to fit that genre. The musicianship shown on this album is amazing, and the creativity to arrange, adapt, and conform the piece is undeniable. The original classical piece remains not only recognizable but more or less intact, and the original bits that are added, such as the lovely Greg Lake piece, "The Sage," fit in nicely.

On the other hand, the album is a pretty good example of why the "pretentious" label is often applied to prog rock. Taking an orchestral piece and converting it to (often) keyboard, bass, and drums is a ballsy move, a prime example of the audacious self-important attitude of prog rock, and one that not all rock fans are going to appreciate. It undeniably exceeds the usual limits of both rock and roll music and the classical source. Whether that's a good or bad thing depends on the listener's preferences. Almost certainly, classical music aficionados will find this to be a sacrilege, even offensive, while rock fans will find moments of brilliance but will possibly be overwhelmed, even befuddled, by parts of the album.

Me, I like a good prog rock album now and then, and this is the first one I ever purchased. At the time, I thought it was a little weird and I wasn't sure what to think of a lot of it back when I got it. I appreciate it more now, but it has never become a favorite. I like ELP's more original Brain Salad Surgery a little better.

I think adapting a well-known classical piece makes this record sometimes feel more like a novelty record than it should. Case in point, the encore, "Nutrocker," an adaptation of "The Nutcracker" that feels tacked on. Sometimes I find humor that I'm not sure was intended. Or maybe it was. This is a highly creative, atmospheric, and brilliantly played adaptation. That they were able to pull it off live makes it even more incredible.

Actually, "incredible" is a pretty good word for it. The word means more than most think it does, and is kind of a double-edged sword. This album treads on both sides of that sword.

Overall, though, I like listening to this one now and then. Can't say I love it, though. I do love parts, but overall, it can sometimes be just a little too much of everything that it is.

This was not at all what I expected.

For whatever reason, I always assumed Emerson, Lake, and Palmer were just another 70s folk-rock band, judging by their album covers and by their band name. I thought they were basically a Crosby, Stills, and Nash-type band. I obviously never listened to them, until now.

As soon as I hit play, I threw all my prior assumptions out the window and just sat back to finally listen to them and give them their fair chance to prove to me what they actually are. I don't really know how to classify this band now. Classical rock from Mars?

When the songs on this album aren't super weird, they're super great. The whole thing is just completely strange and experimental, while still being very musical and accessible. It's weird as hell, and a bit too sci-fi for my taste, but somehow they make it work. It doesn't sound like they're just aliens banging around on synthesizers and organs. They're actually playing songs. That's the most impressive part about this album to me. It seems that experimental music from the 60s and 70s was more or less just noise to be noise. This isn't like that.

The only bad thing I have to say about this album is that the synthesizer sound they used on "The Old Castle" sounds way too similar to when you're getting your teeth cleaned at the dentist. My stress levels went very high during that song, as you can imagine.

All in all, Pictures at an Exhibition is so hard to explain. You just have to listen to it. And if you go in with an open mind, you'll probably come out of it like I did: totally confused by how much you actually enjoyed it.

This was not at all what I expected.

PS: I had no idea that this was actually an old classical piece until after I wrote my review so that kind of changes my perception of it a little bit. I mean, it's not all their own original music, but that's fine. It was still really enjoyable, even when it wasn't. It doesn't make sense to me either.
Posted by Scott at 9:48 AM