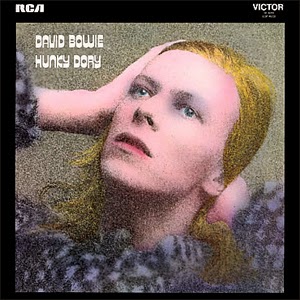 As 1971 approaches its end, we are treated to our first look at one of the inescapable presences of pop music for the next 20 years or more, David Bowie. Like him or not, there's no denying his influence on much of what came later, and that he managed to never be boring.

The first time I remember seeing Bowie on TV, he and his band were all wearing dresses. I'd never seen anything like it. But there was definitely something captivating about the music. Those last two sentences probably sum up David Bowie as well as anything else.

So, let's take a listen to the record.

If you look at album openers, it's hard to find one better than "Changes" for the messages it introduces that can be found throughout the record. The rest of the album was less known to radio listeners. In fact, the album was only a modest success, although in the years to come it would be revisited and reappraised as a groundbreaking album by a major artist who had scratched public consciousness but had not yet really broken through. It's a good album, full of well-written and well-performed songs that were not like anything else, and yet drew on everything that had come before. There's singer-songwriter influence, rock influence, blues, Velvet Underground, Broadway, the brilliantly weird songwriting of the Kinks' Ray Davies, T. Rex glam, Queen's torch songs...pretty much everything. But while it's all of those things, it's also none of those things. The combination is odd and fresh. I can easily imagine people hearing this the first time and not really being sure what to do with it, but finding it somehow captivating. Like that time I saw him on TV.

Highlights for me include the iconoclastic-but-commercial "Changes," "Life On Mars" (a hit single in the UK), "Kooks," the deceptively goofy "Fill Your Heart," the uncanny "Song for Bob Dylan" (with a vocal that is so Bowie, and yet so Dylanesque), and "Queen Bitch," which could well be the best Velvet Underground song that they never did. The album closes with the impenetrable-and-nonsensical-yet-interesting "The Bewlay Brothers," a great closer even if it doesn't make any sense at all.

All in all, this is one of those looks at somebody who would become much bigger than you'd expect from the record's initial response or the response to the songs that had broken out in the previous years, but when you look back, you see it. You see the great future the artist was destined to have, and the influence he'd have, and the inevitable mixed reactions that anybody has who breaks the rules and does something that goes beyond the norm. While his previous albums had been portents of what was to come, it's on this one that he really finds his voice and his persona.

This may be our first look at Bowie on our list of classic albums, but it won't be our last. I look forward to more.

Like my dad said, "Changes" is a great album opener. If you're like me (someone who isn't very familiar with David Bowie's music) I'm sure you will recognize "Changes" immediately. Such a good song! I think it's the only one that I was already familiar with.

A lot of the songs on here reminded me of that typical late 60's pop stuff, which was cool. "Kooks" was a fun little song. It reminded me of the silly side of The Beatles, like "Yellow Submarine" or "Octopus's Garden."

I don't really have much to say about this album. This being my first real taste of David Bowie, I liked it! I can definitely see myself coming back to this album again. We have more Bowie coming up so I'm interested to see how he naturally progresses from here.
Posted by Scott at 8:30 AM