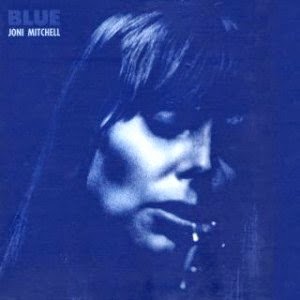 "Blue" is one of the most influential singer-songwriter albums ever. It definitely belongs on any list of classic albums. In fact, many of today's singer-songwriter can trace their style back directly to Joni Mitchell.

The thing about Joni Mitchell is that she sounds like she is completely honest. Playing live was hard for her, especially early in her career, because she was a private person who had problems revealing so much of her inner self to a live audience. Listening to this album, recorded shortly after her break-up with Graham Nash, and largely written (as is obvious in many of the lyrics) during her tour of Europe after that relationship ended. Mitchell said that, on this album, she "felt like a cellophane wrapper on a pack of cigarettes," emotionally transparent and open.

The album is as bare as an open wound, as stark and revealing as maybe any album has ever been. And, even though I'm not always a fan of her soprano leanings, I find this album to be beautiful in its deceptive simplicity. It's not so simple at all, with its alternate tunings and complicated melodies.

I really shouldn't try to single out any songs. I'd have to mention almost all of them. The album works best as a collection. There weren't really any hit songs, but the album itslef is on pretty much every greatest albums list ever compiled. "Carey," which peaked at 93 on the US charts, is a nice, relatively upbeat change from the mellow sadness of the songs that come before it, so it stands out to me. The opening of the title song, "Blue," sends chills down my spine. "River" is a beautiful song that might be familiar to some people. Pretty much every song is strong, but every song is even stronger as part of the whole album.

When I think of favorite artists and albums, Joni Mitchell doesn't come to mind. But this album makes me wonder why that it is. It really is a beautiful album, and a remarkable artistic statement.

I'm sure Joni Mitchell had these songs completely written when she went in to record them, but a lot of the songs feel very loose and spontaneous, like she's just playing and singing whatever she's feeling in that exact moment. That really adds to the charm and beauty of this album though. You can feel the emotion in her vocal delivery and roller coaster melodies.

I'm usually more into more upbeat songs, but on this record, I enjoy the sad slow ones the most. I especially really love her line in the title track: "Crown and anchor me, or let me sail away" or the line in "River": "I wish I had a river I could skate away on."

With this being my first first Joni Mitchell adventure, I liked Blue. I may seek out more from her eventually because this was pretty enjoyable, but I assume that she probably doesn't stray far from this particular sound over most of her 19 studio albums. I think I'd get burned out pretty quick, if that's the case. I've listened to a couple of her songs that came out of the 80s though and those are definitely a departure from the folky/singer-songwriter stuff that she's best known for. Maybe she has a killer disco album somewhere in her discography too...
Posted by Scott at 1:03 PM