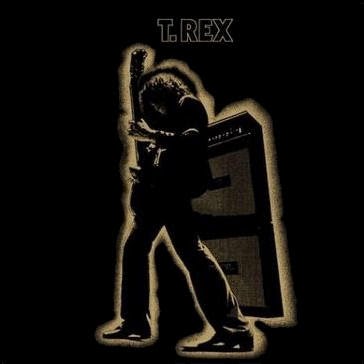 T. Rex is best known in the U.S. for the song "Bang a Gong (Get It On)," from this album. However, listening to Electric Warrior reveals that this is a solid band and a great album.

A pioneer of glam rock, T. Rex treats us to solid bass lines, enjoyable songs, and classic riffs. "Bang a Gong (Get It On)" is clearly the stand-out track, but it fits well with the rest of the album, which is full of the elements that make that such a classic song.

When you compare this to something else from 1971, for example Joni Mitchell's "Blue," it feels like a lightweight, shallow record. There's not a lot of emotional connections to be made here. But it's not supposed to be deep. It's supposed to be a simple glam rock album, a playful record that doesn't take itself too seriously, full of musical games and wordplay (yes, he really compares the object of his affection's body to a car, but then, she does have a hubcap diamond star halo). This is kind of like what rock 'n' roll was originally meant to be, before it grew up and became serious.

It's a fun record, and clear proof that eighties rock started in the early seventies. For example, "Jeepster" could be Adam Ant or any number of eighties bands, slight but catchy and full of Marc Bolan's rather androgynous sensuality. It's no surprise that several songs from this record were covered in the eighties and early nineties.

Maybe not one of my favorite albums, but it spent a few weeks in my car stereo last summer. It's only rock and roll, but I like it.

I've never listened to T. Rex before so I didn't know what to expect at all. When I hit play, I was already into it. "Mambo Sun" was a great way to start the record. I was a little let down though when the song didn't really pick up or bust into any huge chorus or anything, like I was hoping for. But as soon as the next song started, I realized that this was just their sound and it was time to not expect anything more than just mid-tempo pop/rock music.

I don't really have much else to say about this album because it doesn't really do very much. There weren't really any standout tracks on here. They were all fairly similar, but not really in a bad way. This was a very easy album to listen to. T. Rex didn't try to be groundbreaking or anything on here. It was just a nice, safe rock record, and I can handle that. It's good though, for what it is. I just wish they had more dynamics in the music so it didn't sound so flat.
Posted by Scott at 9:56 AM