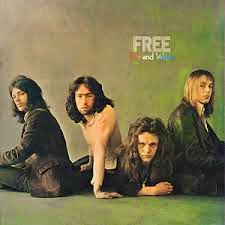 When your band features Paul Rodgers (Free, Bad Company, Queen), Simon Kirke (Free, Bad Company), and Andy Fraser (Free, John Mayall and the Bluesbreakers), it has to be good. Add some brilliant guitar from the late Paul Kossoff and you have a great band.

This is one of those albums that probably shows that the list we're working from comes from England. "Fire and Water" cracked the top 20 in the US, but in England it soared to #2. The album contains solid songs, but most people will probably recognize only the monster hit "All Right Now." But then, that's not a bad song to anchor your record.

"Fire and Water" is loaded with well-performed British blues rock, with solid bass, drums, and guitar, but what makes it for me are Rodgers' vocals. It can easily be argued that he belongs in the top ranks of any lists of best rock and roll vocalists. He was the voice of both Free and Bad Company, and, most recently, Queen.

For me, the highlights of this album are "All Right Now" (of course) and the blues ballad "Heavy Load."

Today, this album sounds very 1970, but that's not a bad thing. As we've seen on this blog, it was a good year. If I were to compile my own best of 1970, I'd probably include this record, but it wouldn't top my list. Still, it's good, solid rock with a blues base and one of rock's premier singers. An enjoyable listen, to be sure.

The name Free didn't initially ring a bell, but when I discovered they were the band that did "All Right Now," I realized that I guess I'd known of them (well, that song) so I was pretty interested in hearing some more stuff by them, especially after I found out that Paul Rodgers fronted the band.

The title track, "Fire and Water" is a great song to kick off the record. Its upbeat blues-rock sound makes you want to play along on air guitar. "Mr. Big" is another awesome jam that people should check out. No wonder the band Mr. Big named themselves after that song.

Obviously, "All Right Now" is the hit from this record. It deserved to be a hit, as it's probably the most single-friendly song on here. It's a fun song and you can't help but feel the positive vibes it exudes. It'll cheer you right up and keep you singing along long after the song is over.

This wasn't a bad album by any means, but it definitely is one of those albums that's only book-ended with great songs, has one or two goodies in the middle, and then the rest are pretty forgettable. This seems like a pretty typical trend I'm starting to notice for albums around this era.
Posted by Scott at 9:30 AM