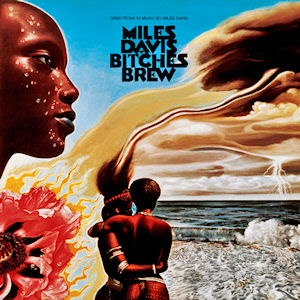 Once again, I'm faced with the problem of not having the vocabulary to really discuss jazz.

However, what I can say about this Miles Davis record is that it surprised me. I really like "Kind of Blue" and expected more of the same, but this album has a wilder, sometimes almost uncontrolled feel to it. The sounds are deep and strong. In technical terms, this record is "freaking awesome."

This dream music. It runs all over the place, and just when it's starting to make sense, it takes an unexpected turn. As such, it holds my attention and captures my imagination. It seems to become most interesting when it becomes harder to understand.

Case in point, the title track. At times, it feels like it's trying to figure out where it wants to go, sometimes crawling to a near stop, like it does at around the midpoint, but then it gets big and loud and carries the listener to an exciting place, maybe a dangerous place. And at times it creeps along slowly, almost confusedly, with sounds that don't quite make sense, like a vivid dream.

"Miles Runs the Voodoo Down" starts out sounding like it could be the Doors, but then Miles jumps in and there's no doubt who it is. It begins with almost a noirish feel, then grows into cool jazz, then becomes bigger and wilder as it goes, like a walk into an exciting city. The rhythm becomes hypnotic, and the stuff in the foreground is vivid and varied, taking the listener on a wild ride. I want to see where it takes me, but it turns out there's no real destination, just an interesting trip.

The final piece, "Sanctuary," starts soft and quiet, a welcome cool down from the exhausting wildness that comes before it. It gets bigger, then almost falls asleep at about the midpoint, leading gently to a big, brassy ending.

The version I have includes a bonus track, "Feio," which works well as a gentle coda to the dream. It doesn't feel out of place with the rest of the album, as bonus tracks sometimes do.

The album is long, and the music is big and noisy and often feels out of control. But sometimes it's little and quiet and, well, still feels kind of out of control. But one thing it's not, and that's dull. I listen, amazed that this came from a human mind, presumably while awake and coherent. It's often intense, sometimes almost violent, like a welcome attack on the senses.

I've never heard anything like it, at least not on this scale. It's challenging and sometimes difficult and exhausting. Like a dream, it sometimes feels like it's going to go somewhere but then it never gets there. I mean that in a good way. I'm not really sure what else to say, besides I like it. And it wears me out. But that's a good thing.

When I think of Miles Davis, the first thing that comes to mind is how much I love Kind of Blue. I still listen to that record often and that's how I picture Miles Davis now.

And then Bitches Brew came up on our list...

I attempted to listen to and review this album a couple of weeks ago, but it's so completely different than the Miles Davis I am used to so it really threw me for a loop that I wasn't ready for. I decided to hold off and listen to it at another time. I thought maybe I was just not in the mood for experimental jazz music that particular day or something.

So now here I am, giving the album a solid listen, and although I still wish it was like the classic jazz style that's featured on Kind of Blue, I tip my hat to the guy for stepping outside of the box and creating some really wild and interesting free-style jazz music. To me, it sounds like Miles had a lot of energy built up and just wanted to let it all out uncontrollably.

While I commend him for doing his thing, this just isn't for me. I like nice smooth jazz to have on while it's raining outside, or as background music while I'm listening to podcasts or working. This stuff just confuses my ears and actually kind of stresses me out. Maybe that's what is supposed to happen when you listen to this album for the first few times. Maybe it was intentional. Maybe it's an album that gets better over multiple listens. Whatever it is, this review is just based on my first solid listen of it. I may try to listen to it again eventually, but for now, I think I will continue with sticking to Kind of Blue when I want to listen to Miles Davis.