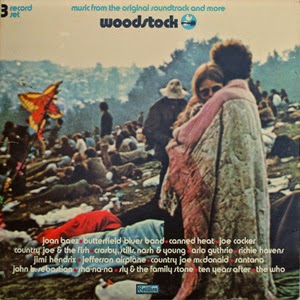 What do you say about one of the most analyzed music events in history? Everything has been said already.

As I've said before in this blog, I'm not a big fan of most live albums. But how do you possibly leave "Woodstock" off a list of classic albums? You can't of course. I'm not going to discuss the phenomenon of the music festival. I will recommend that music fans see the movie and read organizer Michael Lang's book, "The Road to Woodstock." I'd also recommend going for one of the CD box sets that contain more of the music, which is what I'm actually listening to right now. The original soundtrack is great, but I want to hear more.

There's a lot of great music here. Pretty much the whole album is legendary, although some performances are definitely better than others. Some of the bands have released their complete performances. I'd highly suggest digging out the complete Woodstock performances by showstoppers Santana (at the time, an unknown group from the San Francisco Bay Area who were chosen to perform by winning a coin toss, and by virtue of their performance burst onto the music scene as a legendary band), Sly & the Family Stone, and Jimi Hendrix. Whether on record or in the movie, those are my three favorite Woodstock performers. But they are certainly not the only great performances from all four days of the "Three days of peace and music."

Much of the list of performers could be a list of my favorite bands. Several performers, including the Grateful Dead and CCR, are not represented on either the soundtrack or the movie, for various reasons. But those that are here include many of the major bands and singers you'd think of from the period. Some are at the top of their game, and others are not, as you'd expect from any festival.

The sound quality of the soundtrack is surprisingly good for a live album, especially one recorded under the circumstances of this one. The festival was a mess and, at times, the soundtrack reflects that. But Woodstock pretty much summarizes the second half of the sixties, both musically and culturally. I can't imagine not having this album somewhere in my collection.

We've reviewed some compilation albums and soundtracks already, and I've found that it's kind of hard for me to fully get into some of them because they aren't as cohesive as an actual album by one particular band. This Woodstock compilation is kind of a different monster though. Technically, it's a compilation just featuring a bunch of bands that played the festival, but with it all being recorded in the same place, it has a certain cohesiveness to it that makes it not feel jumbled like a typical soundtrack usually is.

Like my dad said, there isn't really much to say about Woodstock because it's all been said before. It was a legendary concert that will be talked about forever. Everyone's seen or heard the notable performances, like Jimi Hendrix's "Star Spangled Banner" which is arguably the best performance of the entire festival.

My only real gripe with this is its length. Obviously, I understand why the people who put this comp together made it this long (in fact, it easily could have been longer) but my attention span was barely hanging on near the end.