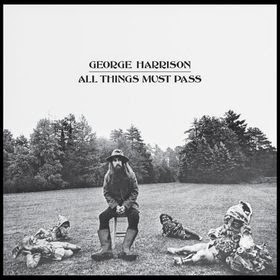 I once heard a Beatles bootleg where George Harrison talks about his idea that maybe the Beatles should be able to work on solo albums while still recording as the Beatles. More than any other Beatle, George must have felt limited within a band that only let his songs trickle out one or two at a time.

When "All Things Must Pass" came out, people must have wondered where this guy had been hiding. Sure, there were hints at his songsmithing skills in the songs the Beatles released. But how could anybody have anticipated this creative explosion?

Three records of mostly excellent songs show what the Beatles were holding back by burying George's skills. If I wanted to list highlights, I'd have to provide the complete track list. There's so much excellence here. It's not only the number of songs, but the range of the material, that shows what the Beatles' "third wheel" was capable of. Who knew?

A track-by-track exploration of a triple album would make for a monster blog post, so for the sake of brevity I won't go there. It's probably enough to say that anybody who thinks Paul and John were the only major talents in the Beatles really needs to listen to this album. Helped by an all-star cast, Harrison truly shines on this record. From quiet spirituals to rowdy rockers, we finally get to see what George is capable of producing.

And he produced a ton. In addition to these six sides, there are reportedly enough jams and outtakes to fill at least two more records. Freed from the constraints of a band dominated by two other songwriters, Harrison almost went crazy, like a dog that gets out of the yard and runs like a bat out of hell with its new-found freedom. And not only is there a lot of material, but it's also really, really good.

It loses a little steam, perhaps, on the third disc, a set of Harrison studio jams, which I really enjoy (considering the all-star cast, it's hard not to like them) but have to admit that they do have a tacked-on feel, like bonus tracks. It hardly matters, though. The entire effect of the album, the jams included, is the revealing of a major talent that had been "hidden in plain sight," as author Robert Rodriguez put it.

So don't be scared off by the size of this set or the number of titles you might not recognize. If you are a rock fan and don't know this album, you really need to remedy that situation. Like, right now. So stop reading this and experience it for yourself.

This is my first time really diving into George Harrison's solo music. I'm sure I've heard a song or two before on the radio or something, but I never sought out more from him. Unfairly, I always just saw him as "the invisible Beatle" before this. So I kind of looked forward to squeeze this big ol' triple-LP album into my schedule so I could give it a solid listen and give George my full attention.

The album starts out with "I'd Have You Anytime" which is a mellow, Beatles-esque song that was co-written with Bob Dylan. I can definitely hear Dylan's influence in the song. I wish the album had kicked off a little more up-beat though because there are some seriously amazing songs on here, come to find out!

"What Is Life" was a song that immediately caught my ear. I started tapping my foot to the bouncy rhythm right away. I also really loved the catchy vocal melodies and tambourines that helped carry the song. During this song, I did a quick Google search and discovered the reason this song in particular really piqued my interest. The song was co-produced by one of my favorite producers, Phil Spector (The Ronettes, The Crystals, etc.). Despite his homicidal tendencies and whacky hair-dos, Spector has been in my top 3 all-time favorite pop music producers, and this song is no exception. Another fun fact about "What Is Life": Eric Clapton played on the track as well!

Side note: After my Google search, I discovered that Phil Spector actually co-produced this entire album. My mind was blown!

A couple songs later, there's a track called "Let It Down." WOW! The gigantic, powerful, rocking introduction to that song certainly does not let me down! It's a huge, heavy wall of sound crushing into my ears. I absolutely loved how heavy that introduction was! The horns were a very nice touch too. Then the song pulls way, way back and gets very minor and moody sounding, but builds back up to the point of huge rockin'-ness again, but then quickly turns its head away and goes back to being mellow again, only to come back into full on rock gloriousness again! I can't say enough good things about this song. I had to go back and listen to it a couple more times before I could move on with the rest of the album.

"Awaiting On You All" is another song where you can really hear that Spector production. The heavy amount of reverb, tambourines, bouncy rhythms, etc. It just oozes with that signature Phil Spector production that I really love.

There's a few songs on here that I didn't immediately love. The 7-minute long "Isn't It A Pity" which chants "Hare Krishna!" a bunch of times was kind of an eye-roller for me. The eye-rolly moments were very few and far between though because there was a lot of songs I fell in love with. I'm excited to go back and revisit this album again soon. It now makes perfect sense why George Harrison was in the Beatles, and I no longer see him as "the invisible Beatle." In fact, he might be my favorite Beatle now.

Now, go listen to "Let It Down" immediately!
Posted by Scott at 5:58 PM

I am pleased, but not surprised, that "All Things Must Pass" has translated well through the generations.