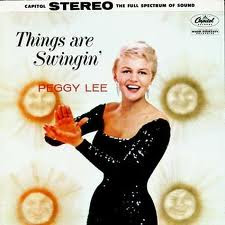 (Note: We're reviewing the original version, not the later edition that included "You Don't Know" and "Fever," so those songs are not included in this review.)

Before I listened to this record, if you would have asked me if I liked Peggy Lee, I probably would have answered, "Not very much." I always saw her as a bit too old fashioned, and a bit too white bread, as somebody who is to rock and roll what Air Supply was to eighties hair bands. In fact, I went into this album with a let's-get-this-over-with attitude, especially following an Elvis greatest hits record.

The opening song, "It's A Wonderful World," truly swings, when I expected the title of the album to be a misnomer. The next song, "Things Are Swingin'," swings even more. After two songs, I'm totally sucked in to this record.

Song after song has clever lyrics and a swinging big band sound. Jack Marshall's arrangements are impeccable, and Peggy Lee's voice fits the music like a soft white glove. I've apparently heard the wrong Peggy Lee songs all my life. When she sings "It's Been A Long Long Time," I even kind of developed a crush on her. This really isn't what I expected.

To say I like this album would be an understatement. This is an album I was dreading? That'll teach me. This is why Brad and I are doing this, to listen to stuff we would normally miss and broaden our musical tastes. Peggy Lee has won my heart. I want to hear more. So much for pre-judging. It just doesn't get much better than this.


I'd never heard of Peggy Lee before this came up on our list. If someone asked me what I know about Peggy Lee, I'd probably say, "She has two first names?" But right when Peggy Lee's singing began on the first song, "It's A Wonderful World," I immediately knew I was going to love this album.

Peggy Lee's voice is warm and welcoming. The whole time listening to this album, I felt like I was being serenaded in a tiny smoke-filled bar. It sounds like a very stripped down version of your typical big band jazz music. Without the horn section, you could say this sounds like Vince Guaraldi featuring Peggy Lee.

It's fun, it's classy, and it makes you want to get up and dance. It's also an album that I can see myself listening to on a night drive. This is definitely one of my favorite records we've reviewed so far.