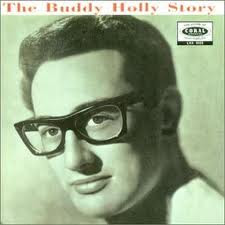 Three months after Buddy Holly's death, Coral Records released this album as a memorial (and, no doubt, to capitalize a bit). The album is lovingly sequenced, begining movingly with "Raining In My Heart," followed by Early In The Morning," which is about missing somebody who is gone. Then it moves into "Peggy Sue" and more of his biggest hits, before ending with another sad song, "It Doesn't Matter Anymore." It was unusual to begin and end with sad songs, but in this case, it seems like the right thing to do.

Buddy Holly's career was so short, but he accomplished so much. Not only by recording so many hit records, but by writing and even producing, something that wasn't done. You can't talk Buddy Holly without wondering what could have been had he been around longer. His influence on so much that followed after in both rock and roll and country was enormous. Would he have remained influential and moved into new territory? Would he have faded away? No one will ever know.

His music was so energetic. And, if you pay attention, you'll discover that his lyrics were among some of t he best of the period, full of humor, irony, and tenderness. The guy could write. he could play. He sang well, and in a variety of styles. It's easy to see why only Elvis was more popular, even though Buddy didn't have the sex appeal, maybe, of so many of the singers of the day. Buddy was the real thing, and is one of my all-time favorite artists, not because of the tragic story but because he was genuinely good. Few artists accomplish what he did, if their careers are much longer.

This album provides a great overview of his career. Everything that was great about Buddy Holly can be found here. I'm going to stop writing now and sit back and enjoy.


My dad pretty much summed it up. Buddy Holly's life ended way too soon, to say the least, but he accomplished so much in the short 4 years he was a professional musician. He opened for Elvis, had a #1 hit ("That'll Be The Day"), performed on the Ed Sullivan Show, and finally, toured with the Big Bopper and Ritchie Valens.

I grew up listening to Buddy Holly, courtesy of my dad's CD collection, and I've always been a fan. I love his diversity in styles and that stutter thing he would do when he sang. I always thought he looked cool too. In fact, I'm just now realizing that his look is kind of the trendy look now.

Greatest hits collections are hard to really review because all the songs were recorded at different times and everything, but this is a great compilation of most of Buddy's...uhh...greatest hits.

I really like the sequencing and flow of this compilation. I like how it starts and ends with sad songs, but then in the middle of the delicious sandwich is his happy and upbeat tunes.

If you're not very familiar with Buddy Holly and his legacy, this is a perfect start for you.