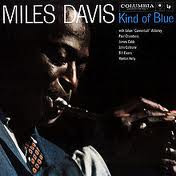 I'm about to write something I very rarely say because I know how widely musical tastes can vary: no music lover's collection is complete unless they have this album. Even if you're not a jazz-head. Usually when I hear about a "must-have" album, I'm skeptical. Nothing is for everybody. But this one time, I'm going to say it myself, for all but the most ardent haters of jazz.

This is one of those precious few records that is beyond description. Created not only by Miles Davis but also by his super group combo (Jimmy Cobb on drums, Paul Chambers on bass, Bill Evans on piano except for one number where he is replaced by Wynton Kelly, John Coltrane on tenor sax, and Cannonball Adderley on alto sax). Putting the best together doesn't always create the best results, but this time it did.

Mostly improvised in the studio, Kind of Blue is the ultimate jazz album. It's moody, beautiful, and never stale. This is midnight music. It doesn't have to be one of your desert island discs (but I wouldn't be surprised to find it on anybody's list), but you have to have it, and you have to pull it out once in a while, when the mood strikes you, turn down the lights, turn up the volume, and surround yourself in beautiful noise.


Everyone knows the name Miles Davis. My earliest memory of hearing his name was in the scene from Billy Madison when an old lady states, "If peeing your pants is cool, consider me Miles Davis." When I first heard that, I didn't actually know who Miles Davis was, but I knew that that joke was really funny.

Before I started listening to Kind Of Blue, I read my dad's review to see what his initial thoughts were. Seeing how much he loved this album got me really excited, mainly because I have never heard it before. Lately, I've been getting really into more jazz music so I was pumped to crank this up and just sit back for the ride.

The first track on the record ("So What") is one that I think every person would recognize, right off the bat. When I hit the play button and heard the opening piano riff, I knew I'd heard it before, and I knew I was going to love this album. The entire album is so relaxing even at it's faster tempoed moments. The combination of upright bass, delicate piano melodies, brush drumming, and an occasional horn instrument will get me every time. I love this classy jazz sound.

After reading a little bit about this album, especially the making of it, only makes my infatuation grow more. It's crazy to think that the other musicians that Miles brought into the studio to record this knew little to nothing about what they were actually going to be recording. I had a couple random notes and sketches of scales and melody lines to improvise, but other than that, they really had no idea. Either they accidentally recorded a classic record that got #12 in Rolling Stones' 500 Greatest Albums of All Time, or Miles Davis knew exactly what he was doing by hiring those specific musicians to accompany him in the studio. I have a feeling it was the latter.

This is indeed worthy of the title "Classic Album."