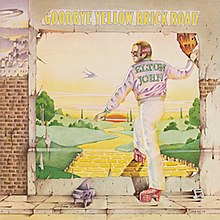 How have I never listened to this before? Elton John wasn't fooling around with this one.

A huge, epic 6 minute long instrumental track opens the album and flows seamlessly into "Love Lies Bleeding" which sounds like a classic upbeat Elton song. Making the opening track 11 minutes long is a bold move, but this was very well done. The instrumental intro and the song itself were both interesting and awesome enough that putting them together in one single track was just fine. But boy was it daunting before I hit play! What a way to open an album though! So good.

With such a huge opening to the album, of course he'd follow that with the fantastic ode to Marilyn Monroe, "Candle in the Wind", and then with (as if it couldn't get any better) my favorite Elton John song "Bennie and the Jets." 19 minutes into the album, it's already perfect.

The vast majority of this album is completely new to me. I'm kicking myself for not listening to this sooner! There are so many fantastic songs on here that I've never heard before, such as "Grey Seal", "Dirty Little Girl", and "Your Sister Can't Twist (But She Can Rock'n' Roll)."

Big hits aside, every song on this album is great. Even "Jamaica Jerk Off", which was pretty unexpected but still fun. I'm definitely going to have to dive into the bonus tracks and documentaries that revolve around this. Somehow 17 songs didn't satisfy me enough. I need more!

Ah, Goodbye Yellow Brick Road, the album I wanted for Christmas when I was 12 or 13, but never got.

Every decade has its smash hits, the albums that define the decade. Can anybody doubt that this is one of them for the seventies? I envy Brad for hearing it for the first time. At the same time, I wondered how he'd like it out of the context of its time. That he digs it makes me happy.

For those who weren't there, it's hard to comprehend just how massive this record was, and maybe even why it was so huge. I can't separate it from nostalgia and just listen to it for a review. I can't help but view it through retro specs. Big, huge, gigantic, diamond-studded retro specs adorned with feathers and everything shiny.

It's somehow easy now to dismiss the album as seventies AM pop (not that there's anything wrong with that), but even a casual listen shows that it's more than that. From the epic "Funeral for a Friend/Love Lies Bleeding" through the rest of all four sides, this is a creative album, filled with interesting, fun songs that often go deeper than mere pop radio fluff.

This is one of those that, if I were to cite favorite songs, I'd pretty much have to list them all. The title song is brilliant, with some of the best put down lyrics this side of Dylan. "Grey Seal" is great. "Saturday Night's Alright for Fighting" and "Bennie and the Jets" were favorites then and still hold up now. "Harmony." "All the Girls Love Alice." I might as well just list the entire album. I can't even pick a favorite side. With a knife to my throat I might pick Side 4, but I'd do it regretting that I hadn't picked the other sides.

So often, the old classics don't fare well when you listen again many years later through your later experiences and changes in taste, especially when so many songs have become part of the fabric of life to the point where maybe you've heard then one too many times. Or a thousand too many times. But not this one. Not for me anyway. Some songs, like "Candle in the Wind," have grown a little old, but for the most part, this is still a great listen, just like it was back in Jr. High.

This album is more than a relic of the past. (Admittedly, it's hard to say that about an album that has just about always been there for me, because I can't judge it without the past coloring my opinion.) That it can still captivate a younger audience, like my kid, shows that there's something timeless here. Take away the Elton John kitsch and the tackiness of the time, and you're still left with a classic album that holds up today.
Posted by Brad at 12:39 PM