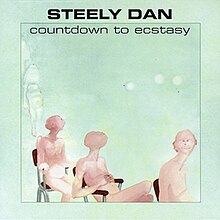 Steely Dan is another one of those bands that I've always heard mentioned but never actually sat and listened to.

Countdown to Ecstasy is packed with groovin' jazz rock. It's really fun to listen to. I'm sure the more I listen to it, the more I will pick up. There's a lot of cool stuff going on throughout the songs. The jazz drum beats, with the bass plucking along, the crazy keyboard solos, the distorted rock guitar solos, catchy vocal melodies, etc.  make it really interesting. This is an album that you can sit and listen to intently, dissecting each instrument, lyric, or melody, or you can listen to it as background music. Either way, it's very enjoyable. It's mellow and rockin' at the same time, which makes it easy to listen to at just about any time.

Some songs I especially enjoyed are "The Boston Rag", "Show Biz Kids", and "My Old School." The album didn't produce any hit singles, but I think that if "My Old School" had been shortened in order to be more radio friendly, it could have done really well. It's a fantastic upbeat catchy tune, but it's almost 6 minutes long.

I'm not sure what the rest of their discography sounds like compared to this album, but I'm definitely more interested in diving into more of Steely Dan's stuff after hearing this.

Confession time: Unlike many of my peers, I was never a big Steely Dan fan. There, I said it.

It's not that I didn't like them, exactly. They're one of those bands who were a radio constant in the 70s, and I usually liked the songs I heard well enough. They didn't usually capture me at a visceral level, but I liked them. The songs were well-crafted, well-produced, and deserved their popularity. They were a part of the soundtrack of my life, but they never became more than that for me, personally. They were almost too tight, too slick.

Except one song. One song that wasn't played much, but when it was, I stopped what I was doing and I listened.

That song, "Boddhisattva," happens to open this album, starting things off in a way that opens my ears to the band I never gave as much attention to as I probably should have. If anything, "Boddhisattva" should have told me that I should go deeper into Steely Dan than the usual radio hits. But what can I say? I was a teenager. I wasn't that aware. Even today, though, when I hear their name mentioned, I think, "Great band, but not quite my cuppa."

Unless I'm actually listening to them.

The truth is, these days, I like their style of jazz rock, and I like their early work, like this one (their second studio album), best. "Boddhisattva," "Razor Boy," "The Boston Rag"--great song after great song, all the way through this album.

In retrospect, it's surprising that this album didn't have bigger hit singles, especially when tracks like "Boddhisattva" and "My Old School" are so familiar now.

So, let's wrap this thing up. I really like this album. A lot. Whenever I listen to it, I don't understand why I don't dig it out more often. It's not as uber-slick as the impression I got from the later seventies hits, for one thing. For another, it's simply a collection of great songs that hold together as a complete album. This album does to me what many other Steely Dan works do: it makes me want to listen to more Steely Dan, more often.

Maybe I am a Steely Dan fan after all.
Posted by Brad at 9:31 AM