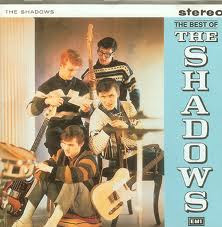 This is a milestone of sorts in our reviews: the first album on our list to be released after I was born.

The Shadows were popular in Great Britain, but they never caught on as well here in the United States. They are interesting because of the way they explored the new sounds that were possible with electric guitars. Like many guitar bands of the period, they chose the somewhat twangy sound delivered by Fender instruments.

At times their instrumental tunes remind me of the "fake" rock and roll heard in sitcoms and low-budget movies of the time. But that's not quite fair. They helped to establish the two guitars/bass/drum combo as the standard lineup. They brought together a certain light jazz and light rock feel, combined with a skiffle background, to create a sound that was fresh at the time. And on the occasional vocal song, like "Baby My Heart," they previewed the sound that took over the world with the British Invasion a couple years later. "All My Sorrows" could be the Kingston Trio gone electric. And "That's My Desire" reminds me of the great songs of Roy Orbison.

But the Shadows were mainly an instrumental group, and it's there that they shine. They coaxed new sounds from their Fenders, though reverb, palm muting, bending, and just plain fine playing. Something like "My Resistance Is Low" had never been heard before, and classics like "Sleepwalk" sparkle with the new sounds.

The Shadows are not well known these days, but if you like the early sixties music, and especially instrumental groups like The Ventures, give them a listen.

Like my dad already said, "All My Sorrows" sounds like it could  be on a Kingston Trio album. It's slow, country-tinged, and full of vocal harmonies. "Shadoogie" sounds very reminiscent of Duane Eddy's surf guitar style. Songs like "Nivram" and "Theme From A Filleted Place" sound like they're in the style of Chet Atkins. Lots of twangy finger-picking. But all the "shadowing" aside, I need to try and give this album a fair review...

The Shadows do a great job at writing diverse songs. They've got a nice mix of fast songs, slow songs, and instrumental songs. They're known for their guitar playing though. They experimented with a lot of different sounds that eventually became popular.

Although the album's songs don't sound very different from earlier ones we've listened to, it still has a lot of originality and experimentation. It's good, but not great, and it's a little too all over the place for me.
Posted by Scott at 11:22 AM