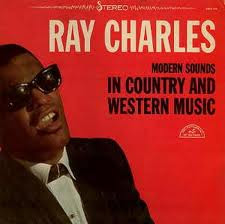 Country music has never had this much soul. As much as I like Ray Charles, I've never given this album its due because Ray is at his best when singing gospel-tinged soul. Well, the laugh was on me. These might be country songs, but Ray still delivers his trademark sound.

You know the title of the album is a little misleading as soon as you hear the opening notes of Ray's take on the Everly's classic "Bye, Bye Love." The highlight for me is the final track, where Ray takes that old standard, "That Lucky Old Sun," and lifts it up among the best of Negro spirituals. Good luck finding a more moving version of that song.

Nobody sings like Ray Charles, and these soulful, brassy, bluesy renditions of country songs are about as soulful as music gets. This is a great album, despite a kind of lame title and less-than-exciting cover.

How can you not share the pain of "I Love You So Much It Hurts"? And who doesn't get a thrill when listening to the classic "I Can't Stop Loving You" and the almost-identical "You Win Again"? This record moves country music out of the honky tonks and into the smoky bars of the "colored" neighborhoods, improving the songs in the process. Even Hank Williams's "Hey, Good Lookin'" becomes a soul classic. As the civil rights movement heated up, I'm sure the rednecks were thrilled to see their music taken over by the guys at the back of the bus. This is a ballsy record, and it works amazingly well. Maybe Ray couldn't eat at the same restaurants, attend the same schools, or drink from the same water fountains, but he could take the most white music of all and give it gospel-tinged soul. And guess what? The whites ate it up. This record was number one for 14 weeks and remained on the chart for almost two years, falling only three weeks short of that mark.

I'm pretty sure this is the only Ray Charles album on our list, and it deserves to be there. This record contains everything good and soulful about Mr. Charles's music, no matter what the title might lead you to believe.


When I saw that this was next on our list, I got really excited. I've never listened to a full Ray Charles album before, but I've always wanted to. I didn't know where to begin so I guess this is a good place to start, with a "classic."

The first song, "Bye, Bye Love", kicks the album off with a bang. It's a fast rockin' 2 minute song, made popular by the Everly Brothers. That song leads right into the slower "You Don't Know Me" and this song really shows what this album's all about. It's a mid-tempo song with more soul than a pair of shoes.

Reading about the recording process, it's interesting how Ray picked the songs to do. Apparently, he was given about 250 songs from popular country artists from the time, and then Ray listened to each one to decide which ones he wanted to remake, giving it that Ray Charles flavor.

I never realized how great Ray Charles actually was. I've always known him as a classic artist, but I've never given him a real chance myself. I love his voice on this album. He sounds young and full of raw emotion and soul. Some songs are better than others, but overall this is a solid 3 and a half stars from me.
Posted by Scott at 12:53 PM