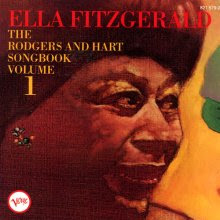 Brad's Take:
This is a collection of songs written by the duo Richard Rodgers and Lorenzo Hart as performed by the incredible Ella Fitzgerald. In the 24 years that they wrote music together, Rodgers and Hart wrote over 500 songs and 28 stage musicals, including A Connecticut Yankee.

I personally haven't listened to any of the original Rodgers and Hart versions of these songs, at least that I am aware of, so I can't really compare Ella's recordings to the originals. From what I can tell though, I'm sure Ella's beautiful voice does them justice, if they aren't even better.

Ella Fitzgerald reminds me of a female Frank Sinatra. She has that same kind of unmistakable classic voice that Frank had. Another thing that reminds me of Frank Sinatra is that they both had slow melancholy ballads as well as up-tempo swing songs, and they both did each style perfectly. I'm glad neither of them just stuck with one style.

Ella also reminds me of a classy neighbor who'd sing around the house, but was too shy and modest to ever make a recording or perform in public, and would give you cookies if you came over to visit. I just imagine her singing over some of her favorite records while she was cleaning the house or something, and the only way you could really ever watch her sing was peering through the window or putting your ear against the front door, like a creep.

Although all of the songs on this compilation are written by someone else, she makes them her own in these recordings. She sings with just as much passion as she would have if she had written them herself. But you can't forget to mention the beautiful compositions by Buddy Bregman. Ella and Buddy really complimented each other extremely well on this album.

There's no reason why anyone who likes classic jazz and swing music shouldn't have this album in their collection.

Dad's Take:
I've been looking forward to listening to this one. I've never heard it, but I believe that Ella Fitzgerald had one of the greatest voices in the history of recorded music. Unfortunately, I read Brad's review before I started listening. Now I feel like I have to wear my creepy peeping Tom outfit. And here all this time I thought I was done with that part of my life. So I'll grab my trench coat and other gear from the back of the closet and put this album on.

I worried going in that I would know all of the songs, so it would feel like a tribute album. Fortunately, I only recognize a few of the titles. I like that, because part of the fun of this little exercise Brad and I are going through is hearing new music I might not otherwise have picked up. Turns out it wouldn't have mattered. Thanks to Ella's incredible performances and the brilliant arrangements by Buddy Bregman, this record could contain her versions of all the songs I know best, or total gibberish for that matter, and I'd still be enthralled. And, of course, the songs themselves are wonderful.

I find myself not even caring about the songs and just concentrating on Lady Ella's voice. And when she's not singing, the musical arrangements are almost as good. A few times I' even wished she wouldn't sing again for just a little longer during instrumental breaks so I could listen to the music. Of course, those thoughts vanish as soon as her voice kicks in again. I really like that Bergman's work is not mixed as far back as Nelson Riddle's are in In The Wee Small Hours.

It's interesting to compare Ella and Sinatra's versions of "Dancing On The Ceiling." We heard Frank's version on In The Wee Small Hours. Hearing two masters interpret the same song in such different ways is a musical education all by itself. Where Frank imbued the song with an ironic melancholy, Ella makes it a pure romantic dream. If this were a competition, I couldn't pick a winner. Because I prefer Ella's voice, I thought I'd give her the edge, but her version makes me appreciate Sinatra's ability to put an unexpected twist of emotion into a song. We get to compare the two albums again with "It Never Entered My Mind."

I've tried to find both the merits and flaws of each album so far, and I have to admit, I'm having trouble finding any flaws, unless it's that, even with 17 songs, this record is too short. This is about as perfect as it gets and is--unexpectedly--my favorite on our list so far. Lucky for us, Ella Fitzgerald released a volume 2.

You have this on vinyl!?!

No, Briscoe. But I wouldn't mind finding it.