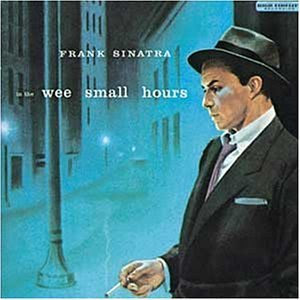 I've had this album in my collection for quite a while, but before I listened to this, when I thought of Frank Sinatra, I thought of "New York, New York." For my whole life, I associated him only with upbeat, big band, swingin' tunes which were never really my thing. I'd never listened to an entire Frank Sinatra album.

Then, one slow Sunday evening at work, I was on a music-based website that I check out daily and I saw a message board topic called "Frank Sinatra - In The Wee Small Hours." Out of curiosity, I clicked it and read some of the comments and everyone was praising it and saying how depressing this album was. So I decided to download it and listen.

I wasn't prepared for this!

I found myself forgetting about my work I had to do and getting lost in this depressing, dark, loneliness feeling. I fell in love with this album immediately. It blew my mind that each song was just so damn sad! You can't help but feel the pain in Frank's voice. We all know the feeling of a hard break-up, and this album captures the feelings perfectly. I was halfway through my first spin of the album with tears in my eyes, and I already knew this was something special and I had to buy it right then. I found it for a dollar or something on Amazon and ordered a copy of the CD before I was even through with the whole thing.

The songs Sinatra chose for this concept record are perfect. My favorite song is probably "When Your Lover Has Gone" (originally written by Einar Aaron Swan.) The chorus to this song is so beautifully sad and Frank nails it...
"When you're alone, who cares for starlit skies
When you're alone, the magic moonlight dies
At break of dawn, there is no sunrise
When your lover has gone..."

Although I am in love with album, it's not one to just listen to on a summer afternoon drive... This is a mood record. You have to listen to this while you're laying on the bed in the dark after someone breaks your heart. That's when this album will hit you. It's great if you're in the mood for some slow jazz music, but again, it's something you need to be in the right mood for.

I know it's sacrilege and I'm asking for trouble, and am likely to get it, but I had trouble sticking with this album. I did it, but it wasn't easy.

It's not the songs. The individual songs are great. Sinatra knew how to sing a song (although I like him near the higher part of his range--there's this one part of his vocal range, near the lower end, the one he was stuck in for so much of his later work, that is fingernails on chalkboard for me), and this set is all the proof anyone would ever need. The songs are lyrically interesting, with only one ("Ill Wind") that really didn't do it for me. Nelson Riddle's arrangements are jazzy and smoky and brilliantly understated. I wish I could hear them better, but it was the style of the day to mix the vocalist way to the front and almost bury most of the music. There's some spectacular music on this album, when you can hear it.

The problem for me is that, despite some very interesting intros that promise more, every song devolves to roughly the same tempo. Sinatra sings them so evenly that it's hard to distinguish one song from another. The sameness bored me, and made it a struggle to keep going. One or two songs at a time, and I might have been able to enjoy the genius that went into every note of this record. But after the first side, it had become almost torture, and I had to take a fifteen minute break before I could continue through eight more songs of this monotonous approach.

Sinatra and Riddle did a great job of painting the picture of a guy at a bar, staring into his drink, cigarette burning in the ash tray, lamenting his lost love. The album very rarely slips from melancholy to sentimentality. Unfortunately, I can only look at one picture for so long before I want to move on to another. An occasional change of tempo would be nice. And if you really want to stress sadness, you need to include enough joy to make the contrasting sadness deeper.

This is a great album that deserves the almost unanimous praise it gets, but there's too much of a good thing here for me. I know it's considered one of the first concept albums, and it holds to the concept very well, too well in fact. An occasional change of pace would have kept this from becoming maudlin and boring. I need a break, something different, some hope, some of the excitement of Sinatra's early swing work. It's OK to make all the songs sad, but they can be sad without all having the same boring, morose tone.

B.B. King says he was a Sinatra "nut" and used to go to sleep every night listening to this album. Probably not a bad choice. It puts me to sleep too.

Great album, but it doesn't work for me on a personal level. I guess that's what I get for being in a good place, relationship-wise, and for wanting to put a bad time behind me. And for having a short attention span.
Posted by Scott at 8:06 PM

I love this blog idea. I can't wait to read more reviews. What's coming up next?

We have around 400 albums on our list. The tricky part is being able to both listen to them. But I really think this is going to be fun, and, I hope, entertaining.

What a cool blog idea! It's so interesting to see the different opinions from two different generations. I think this might be good research for me as well.

Nice work on you blog set up. Sheesh. What did it take you? A minute?

All about keeping it simple, Julie. Keep an eye on our blog. More reviews are in the works. I've written a few more, but have to get the music to Brad for his takes.

I've been wanting to listen to this album for about a year now, and a week ago I decided to finally give it a spin.

I was apprehensive to listen to it, because it's difficult to have the desire to listen to something that you know will make you sad.

I really like this album. "It Never Entered My Mind" would have to be the standout track for me.

I do wish the arrangement wasn't pushed so far back in the mixing. It's hard to pay attention to while Frank is singing. When I can hear it, it's great.

This album is a must-listen. I think it receives such praise for a reason, though I understand why it wouldn't be enjoyable for everyone.