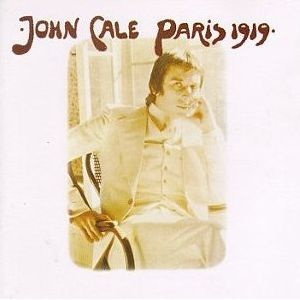 Funny how reviewing an album makes me notice something that has always kind of been there, as if it's the first time. Paying attention will do that.

When Paris 1919 opens, I detect an immediate Brian Wilson influence, a melodious baroque pop rock that was really not at all what I expected. The opener, "Child's Christmas in Wales," is poetic, as you'd expect from its titular reference to Dylan Thomas who is also referenced in the second verse. But it has poppy light-rock feel that makes it accessible despite its complicated lyrics. It's only the first of several literary references in an album that also includes songs named for Graham Greene and Macbeth.

It's a great introduction to an excellent album.

This record immediately grabbed me and didn't let go. It's smart without being self-obsessed, poetic without being obscure and, more than anything else, it's musical, with great melodies and incredible songs. A good example of this musicality is "The Endless Plain of Fortune," with its Wilson-like dark chords and heavy orchestration that create a somewhat frightening mood that grabs me by the throat and doesn't let go.

Song after song blows me away. "Andalucia" takes me to another world. "Macbeth" has a rock sound you wouldn't expect, with a bouncy Beach Boys-like rhythm and melody, but a harder feel. "Graham Greene" is another fun song. Every song on the album is enjoyable, and every song is substantial enough to require multiple listening to take it all in.

This is a great album, start to finish. Definitely one I need to know better.

The version I have includes a number of bonus outtakes, alternate takes, and rehearsals, which help to illuminate the album, but which I won't review in detail.

I can't say I ever heard of John Cale before his album Paris 1919 popped up on our list. I've started listening to it maybe three or four different times so we could carry on with our reviews, but each time ended pretty quickly after it started. I either got distracted, got bored, or it didn't fit the mood I was in at the time. I wanted to give it a fair shot so I waited. But when I decided to try and give it another go, it hit me. Right from the opening chords of the first track, "Child's Christmas in Wales" I knew that this was the right time to finally write about it.

Like my old man said, the Beach Boys/Brian Wilson influence is definitely apparent. But it's not a copy-cat situation, like Billy Fury trying to be Elvis and Buddy Holly. Instead, you just hear a guy creating beautiful music that is inspired yet unique.

To me, this doesn't feel like an album that was recorded in an actual recording studio. It feels more like something he created in his house at his own leisure, and then eventually released to the outside world when he thought it was finally right. The reason I feel that way, I think, is because it sounds so warm and laid back. "Andalucia" is a good example of what I mean.

But then "Macbeth" comes in... This song changes everything. Just when you start feeling comfortable and at home, all of a sudden, John throws a curve ball and hits you in the face with a loud, energetic, rocker. Squeal-y guitar solos and relentless drumming throughout the whole song really makes this one stand out.

Paris 1919 really is a masterpiece. It packs so much into just 30 minutes. There isn't anything missing here. You've got fantastic pop hooks, gorgeous instrumentation, big rockin' curve balls, and stripped down mellow songs. The lyrics are unique, the melodies are great... The whole album is just awesome.

I'm glad I waited so long to review this. Today was the perfect day to listen to this one.
Posted by Scott at 7:51 AM