"Blackboard Jungle Dub" by Lee Perry and the Upsetters (1973) 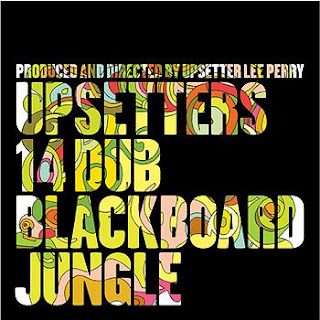 Lee Perry was pioneer of dub music, taking sounds he and dubbing them into innovative reggae music. This album originally had a very limited release, 300 copies, and sold only in Jamaica. That it has managed to build a cult following worthy of a classic albums list is pretty amazing.

OK, I have to admit it. Everything in that previous sentence led me to dread this review. This really isn't my kind of thing. But I didn't need to be afraid. It's actually a pleasant listen, although it's also very long and quickly starts to all sound the same.

It's really not so bad. It reminds me of some of those tropical sounds albums we did early in our attempt to review everything in this list. It makes for some interesting listening, and sometimes the sounds capture my imagination.

The problem is, this is so long, and that rhythm starts to sound monotonous very quickly. So, I'm listening to the whole album, and enjoying parts of it, but I have to admit, I'm really kind of bored. Nothing really stands out. It's just one long groove, kind of cool at times, but mostly it just grows old fast. I know there are probably devotees who would jump all over me for this review, but, you know, people like what they like, and this just does very little for me. It doesn't affect me emotionally or interest me intellectually.

I don't know what else to say. This just isn't the kind of music that holds my attention for 14 songs (18 on our expanded edition). I'm not saying it's bad. It might even be great. If it weren't so goldern long I might even actually like it, kind of. But, sorry dub fans, this just isn't for me.

The purpose of my dad and I starting this blog was to the show how generation gaps might affect reviews of a particular album. There's been a lot of albums so far where my old man loves an album, but I have a total opposite opinion, and that's what makes this blog the most interesting, usually.

This will not be one of those interesting reviews.

Dub music (or reggae, or whatever you're supposed to call this) is so far out of my comfort zone and personal taste. I just can't get into this at all. I can't even pretend to be optimistic about it. I have absolutely no interest in this style of music.

I think it's safe to say that you won't be seeing me or my dad at any reggae/dub festivals anytime soon.
Posted by Scott at 11:47 AM