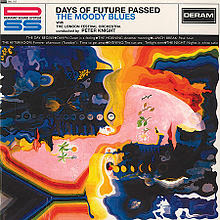 I wouldn't expect the classical music to run so smoothly with the rock songs, but (somehow) it works magically.
Posted by Scott at 8:17 PM