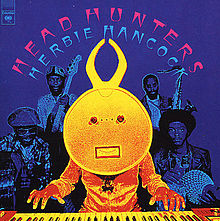 From the first throbbing bass beat, you know this is not going to be your typical jazz album. Hancock brought jazz into the 70's by adding a solid helping of funk, and the result is brilliant.

There are still plenty of jazz notes, but the twin infusion of funky backbeats and electronic synths add a level of fun that drew me in immediately. Even if the six-note bass beat of the first track, "Chameleon," does start to feel repetitive, there's so much going on behind it that the song does not get dull, even clocking in at 15 minutes. And, yes, you do eventually get a break from that beat eventually. About when you really want a change, the song shifts to another funky breakdown in the next movement. "Chameleon makes me think of a jazzier Sly & the Family Stone. Which is probably no coincidence, since the third song on this album is called "Sly," and is dedicated to Mr. Stone. I'm usually not sorry to see a 15-minute song end, but I was this time.

The second cut is a reworking of Hancock's classic "Watermelon Man." It starts out with some great beer bottle blowing that imitates an African Pygmy hindewho. Yeah, I looked that up. It's not something I just knew. Until now. "Watermelon Man" feels more like an older, classical jazz song, even after Hancock imbues it with a healthy serving of funk flavors that may be more mellow than they are on the first track, but they still keep the head and neck bopping. Add in the sweet and weird sounds of that bottle, and the you get a huge pile of Amazing.

Next up is "Sly," and it does remind me of my favorite funk/soul band. The album was recorded in Sly's San Francisco, so it wouldn't surprise me to learn that Mr. Stone popped his rather spaced-out head in once in a while to listen and offer his approval. Of course, I don't know if this happened, but I suppose it could have. "Sly" even reminds me of San Francisco, with its African funk, Latin rhythms, and a psychedelic undercurrent, all of which are, of course, also represented in the music of Sly & the Family Stone. The song really takes off at the six-minute mark, taking you higher until resolving in a cooler closing section.

The final track is the appropriately named "Vein Melter," which starts out with a cool, mellow groove, then builds into a melodic piece of visceral jazz built around Hancock's brilliant keyboards and some cool sax. From the title, I expected something harder, but this proves that you don't have to rock hard to have your veins melted. It's spacey, gentle, with a melting coolness.

I expected to like this album. I didn't expect it to be one of the favorites from our list so far. I don't remember ever listening to it start-to-finish before, but it's never too late to get hooked on a great record. These 42 minutes have been far too short.

Whenever I hear the name Herbie Hancock, I think of this scene in the 90's movie Tommy Boy starring Chris Farley. I can't recall any time where I've actually listened to Herbie Hancock, so this 90's movie reference is pretty much all I've had to go off of when it comes to this man. But after hearing this album, what a disservice! This guy rules!

I'm loving this funk jazz (or jazz funk) music so much. This album is full of energy, cool solos, funky bass lines, etc. It's like he's making music for the parents AND the kids, and that's pretty darn cool!

Usually when I see an album that just contains under 5 songs that are each 10+ minutes long, I get cautious, but right when I started Headhunters, I was all aboard! The funky bass line that immediately comes in immediately got me hooked. I wonder if it's an actual bass guitar, or if it's a synthesizer. Or maybe a mix of both? It sounds synthy to me, but I love it.

The third track, ("Sly"), has some incredible playing on it. Every instrument sounds like it's being played at the fastest tempo they could go. It almost sounds like it's being fast forwarded, but you're still able to understand everything that's being played. If I had drank a Red Bull or a coffee before listening to this song, I think I would have exploded. It's so energetic and fast that it makes you want to bob your head a million miles an hour. This is probably my favorite track off the album.

Overall, these 4 tracks go by way too fast and I just want to listen to this a few more times.