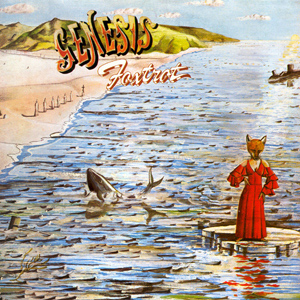 Back before Genesis became an icon of Eighties pop radio, they were a groundbreaking, if sometimes dull, progressive rock band. This particular album, their fourth, is more proof that the list we're working from for these review comes out of Britain, because this particular album, which hit number 12 on the UK charts, did absolutely nothing here in the US. But, hey, it was #1 in Italy.

I have to admit that I've never been much of a fan of Phil Collins's singing, although I think he's a very talented and very funny dude. That bias prejudices me against much of Genesis's work, maybe somewhat unfairly. But people like what they like.

That said, this is a pretty good record, for what it is. It's more accessible to a pop/rock ear than some prog rock is. Sure, it lacks that working-class edge that most of the best rock and roll has, but it is a musically interesting album, with meaningful (if sometimes somewhat obscure) lyrics. There's some real rock here at times, and there are indications that Genesis had some serious radio potential, as they proved later in their career. I like the whimsical pseudo-medieval-fairy-taleism of some of the songs.

I'm actually enjoying this album, but I'm not loving it. There are bursts of brilliance. I think the highlight for me is the "Willow Farm" section of the "Supper's Ready" suite that ends the record. That section is funny and dramatic and I like it. And then, at other times, I find my attention being easily drawn away to other things. I like that there's plenty of rock in their prog, but I'm hearing very little that makes me fall in love with the record.

I'm afraid this is like a pleasant first date that is fun while it lasts, but you know it's not going to go anywhere so you just try to have a good time while you're there. And, yes, one of the reasons is the rather annoying whine of that Collins voice. And the keyboards that sometimes remind me of the old Disneyland Main Street Electrical Parade. Maybe if I went back to this one for a second date, there could be a more meaningful connection, but I feel little compulsion to try it again. Now that I've listened to it all the way through and I know what it contains, if I feel the right mood and have nothing better to do, I might give it another shot. There really is some good stuff here, so I'll keep its number in my little black book.

But, really, if I were Genesis, I wouldn't sit by the phone waiting for me to call. I guess I'm just not that into you.

Like most people my age, I pretty much only know Genesis for their album Invisible Touch. In fact, I forget that they were around LONG before that album came out in (the year of your Bradley) 1986. Their popular songs from the 80s are the sound I know them for, so this album was a surprise to me.

Also, I always forget that before Peter Gabriel wrote "In Your Eyes" he was the lead singer of Genesis for a long time. Fortunately, he takes on lots of the vocal duties on this album. So does drummer Phil Collins though.

I don't hate Phil Collins' voice as much as my old man does, but I feel like it Peter Gabriel's works much better for this particular style of music. Phil's voice makes a lot more sense on the poppy 80s tracks that I know him best for. I can't even get into the Disney Tarzan movie that Phil Collins did all the music for. Something about the soundtrack drives me absolutely nuts. It's just too much Phil, I guess.

These prog rock albums are hard for me to get through willingly. I have music A.D.D. or something because when I see a song is over 5 minutes, I get very weary of it. And this particular album only has 2 tracks that are under 5 minutes, and a closing track that is 23 minutes long.

It's hard to tell if I have favorite/least favorite songs on here. Each song has parts that I liked a lot, but just as many parts that I thought were really terrible. If I absolutely had to pick a couple songs to go back to, I'd probably choose "Get Em Out By Friday" and "Can-Utility And The Coastliners." Those two songs had a lot of really enjoyable parts in them.