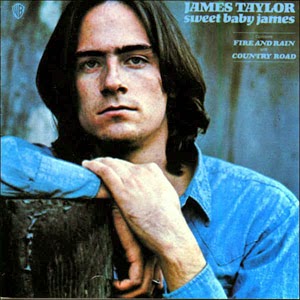 Early seventies music was largely defined by the singer-songwriter, and it's easy to argue that James Taylor was the king of the genre. Sweet Baby James is the first of nine consecutive Top 20 albums for JT, seven of them Top 10.

Building on a base of folk and pop, with a little rock and a touch of country, James Taylor was one of the dominant players on the airwaves of the time. This is the album that introduced him to most people, although it was his second album. "Fire and Rain" was a #3 hit, and "Country Road" also charted in the Top 40. Although not released as a single at the time, "Sweet Baby James" has become one of Taylor's most-beloved tunes.

Those who know Taylor mostly for his hits will have plenty to discover here. The highlight here is, of course, "Fire and Rain," one of the truly great songs in this genre, full of angst and hidden meanings and sorrow and and regret and even a little hope. Try not to sing along. Just try. Even if you don't know the words, chances are you'll try. He even makes the kind of silly traditional song "Oh Susannah" sound deep and important. "Suite for 20 G," which would feel at home on a Crosby Stills & Nash record, is another highlight that you might not know, one I could easily listen to at twice its length. The jam has just started when the song comes to an end, leaving me wanting more.

There are no real surprises here. James Taylor sounds like James Taylor: smart, mellow, melodic soft rock delivered with his velvety voice. Even when he stretches beyond the soft tunes with a song like the bluesy "Steamroller" and "Oh Baby Don't You Loose Your Lip On Me," he still sounds like you expect him to sound.

And that's not a bad thing. The album is a solid effort that sets the tone for much of the first half of the decade. And he didn't stop there. In fact, he's had three albums peak at #4 in the 2000s. Almost everything he's ever done has gone gold or platinum. As far as breakout albums go, Sweet Baby James is tough to beat.

Like my old man said, this sounds like James Taylor. And I agree that that's not a bad thing. We haven't reviewed a James Taylor album yet so it's cool that I am finally listening to a complete album of his rather than just whatever song is on in the grocery store.

Sweet Baby James doesn't pack much of a punch like the Simon and Garfunkel album that we reviewed just before this did, but I can still enjoy this. It's a lot more stripped down and bouncy, and should probably be listened to in a field of flowers.

The bluesy "Steamroller" is a nice change of pace. It definitely has the punch I was missing. When the full band popped in about a minute into the song, I got really excited because moments before that, I was thinking to myself, "Man, I wish this song wasn't just him on a guitar. It needs some drums and bass." And then that's when all the other instruments came in.

"Fire and Rain" is a classic song, and it's probably the one I've heard the most by him. Like my dad said, it's a song that you can't help but sing along with. It's completely true. I'm going to have "I've seen fire and I've seen rain" stuck in my head for awhile today.

By the time I got to "Suite for 20 G," I was feeling a little restless and eager for the album to be over. But this song got me excited again. It goes from a standard James Taylor sounding song and then it gets to the halfway point and becomes a big funky jam with horns and a contagious bass riff. There wasn't anything else like this that on the album which is kind of a bummer.

The story behind the titling of the song "Suite for 20 G" is pretty entertaining. James was promised $20,000 once the album was finished and delivered. He needed one more song so he strung together three unfinished songs into a "suite," and completed the album.

All in all, Sweet Baby James was a mostly enjoyable listen. His vocal range is very monotonous across the entire thing, which can get a little boring, but the actual songs were good and some of them were really enjoyable.
Posted by Scott at 10:57 AM