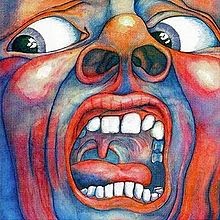 This is one of those albums I've somehow missed over the years. I've heard parts, but I think I've only sat and listened to the whole thing once before. Not sure why, because I like it.

I'm wondering how Brad will respond to this one. I don't really see him getting into this kind of heavy prog rock, but I don't think he'll hate it either. But here's my own response.

The album begins with the crazy rock music of "XXI Century Schizoid Man." It almost sounds like a spacy precursor to grunge or alternative rock. I like songs about the insane, for some reason, and this doesn't disappoint.

Next up is the very pretty, Pink Floyd-ish "I Talk To The Wind." I got so wrapped up in the song that I forgot to take notes. Beautiful song with classical touches.

The third track, "Epitaph," has a Renaissance feel to it. It's a pretty song that reminds me in places of the Moody Blues, which shouldn't be too surprising because they had moved into the brand new progressive rock territory with their two albums that came out before this one.

The next track is the one that hit me the hardest. "Moon Child" completed altered how I feel, which I guess meant it was a successful tune. Like the other songs on this album, it's a mini-suite, this time comprised of three sections, "Moon Child," "The Dream," and "The Illusion." The first section is spacy and psychedelic, with a softer, classical-leaning sound. It creates a moody musical fantasy about a moon child waiting to be kissed by a sun child. "The Dream" is unlike anything I've heard before. It begins with a chimey, pretty, sleepy section that feels like you're being carried away on a cloud, then moves into a hypnotic succession of little tinkling bits of sound. like a dream, you wonder where it will take you, but then you end up somewhere different. The track ends with an attempted return to reality, only reality has been altered and is not real anymore. If there were such a thing as a lullabye of awakening, it would sound like this.

Finally, the last track, "Court of the Crimson King," is a return to a more rock-like environment. Think of it as medieval fantasy prog-rock. It moves all over the place, from rock to a circus and back to some Moodies-influenced rock. At one point, the song becomes almost silent, then it explodes into waves of rock music before suddenly coming to an end.

There are only five tracks on this album, but their suite like quality includes enough variation to keep the tracks from becoming dull or from feeling overly long. Like most prog-rock, there's a bit of pretension and self-indulgence, but it's not as annoying here as on some other albums.

This album met with very mixed reviews upon release, but has since become a classic. There was nothing quite like it when it was released, so it's not surprising that it seems to have been a love-it-or-hate-it record. I'm looking forward to see where it takes Bradley.

When I saw the album title and cover art, I knew this wasn't going to be a straightforward pop album or anything like that. I could just tell that it was going to be interesting and weird, so I went into it with that mentality. I judged a book by its cover, and my assumptions were spot on.

The first song "21st Century Schizoid Man" is a heavily distorted rock song with strange lyrics and distorted vocals. It reminded me a little bit of Black Sabbath, although it had a middle section that was basically a metal band playing jazz music, with everyone taking solos. The song is definitely titled correctly, in that it's completely schizophrenic. Also, an interesting side note: This song was sampled in Kanye West's song "Power."

The next song ("I Talk To The Wind") is a lot less schizo. It's basically drums, bass, and flute dancing around with some mellow vocals laced in. This song is very "1969-ish."

"Epitaph" has a special significance to me. While doing a little bit of research while listening to this album, I learned that one of my favorite punk rock record labels in high school (Epitaph Records) was named after this song. Without that record label (started by Bad Religion's guitarist, Brett Gurewitz), I probably wouldn't have gotten into a lot of the music that I fell in love with in high school. So for that, it gets my respect. As for the song itself though, I struggled to get through the entire thing. Unlike the previous 2 tracks, I could feel the song's length taking a toll on my patience. It sounds like a typical Woodstock-era prog-rock song.

"Moonchild" is more mellow jazz stuff. Some parts of the song actually get to the point of being almost completely quiet. You can barely hear the drums and guitars being touched. It's an interesting little jam, but I can only handle so much free-form playing before it sounds like it's just a band dinking around on their own while another member is tuning their guitar or something. I've experienced moments like that many times at band practice and it gets kind of irritating. Especially 12 minutes of it, like in this song.

The final track, "The Court of the Crimson King", had a cool chorus of "Ahhhh's" which sound very epic. I feel like this song (and the entire album) would probably be a lot more enjoyable if the listener was on some kind of drugs, which I assume the band was at the time. It's a late 60's prog-rock song, that's all there really is to it.

Especially for being the band's debut album, I think they did it exactly what they set out to do. And the fact that they produced it themselves makes it even more impressive. This type of album would typically be a band's third or fourth, where they decide to take their poppy music to a "more artistic level" with no boundaries. They just went straight for it though on their debut which is admirable.

For what it is, it's pretty great. It was an enjoyable listen, for the most part. Sometimes the songs dragged on in the middle sections, but I got through it just fine. The first track was definitely my favorite though. I wish more of the songs had been heavier like that one.
Posted by Scott at 3:54 PM