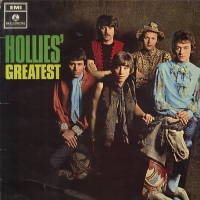 Dad, I'm kind of mad at you. Maybe you played them around the house or in the car here and there, but you should have engraved this band into my head, like you did with The Beach Boys, Jan & Dean, and Dr. Demento. This stuff ruuuules! Now I need to collect all things Hollies.
Posted by Scott at 7:24 AM

Very nice review and very unusual blog, I mean, dad and son takes their visions over the same album? That's really new to me and I just loved it.
Every time I see something written about the Hollies I'll just go crazy looking for some reference to 'Stop right there' (one of my favorite pop songs) but I never ever find any. Have some of you listened to it? If not, it's in their 'Evolution' album of 1967 if I'm not mistaken, you should probably give it a listen.
My regards and greetings from Brazil.

Thanks for dropping by, Valladão, and thanks for the . "Stop Right good words about the blog concept. There" is a great song, with possibly the most psychedelic violin solo ever.